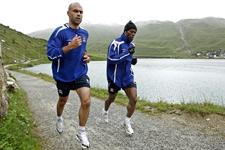 It was amid tough conditions that the Olympiens threw themselves into the early morning run around lake Le Rosset before hitting Bourg Saint-Maurice to escape the afternoon snow.
Indeed, at dawn snow began falling on Tignes, to the surprise of all the Olympiens. But they didn’t let that stop them from doing three laps of the lake on the bikes.
At 11:00, they hit the same course on foot, but at a considerably higher pace than the day before despite the cold and snow that chased them all the way back to the hotel. “Beautiful July weather,” said a sardonic Jérémy Toulalan, covered from head to foot in snow.

The snow in fact obliged the OL delegation to change the afternoon training venue, the rain and greasy surface having already hindered Alain Perrin and his men the day before. They moved proceedings to Bourg Saint-Maurice, 45 minutes from Tignes, so they could hold a proper and full training session. Jérémy Toulalan, known for his considerable athletic qualities, didn’t balk at the idea of the 27-kilometre trip for a training session: “It’s snowing pretty heavily, but we’ll make do. A good season starts with a good pre-season. We’re changing the location but not the substance.”

So the players got stuck into training with Robert Duverne. They did some ball work, sprints and first touch exercises before Cris and co worked on ball control, volleys and long passes in groups of 4.
Coupet, Vercoutre and Hartock did their specialist keeper training with goalkeeping coach Joël Bats before joining up with the rest of the squad for a match. Milan Baros, victim of an inflammation of the plantar fascia at the beginning of the week, equipped himself with new inner soles in order to train. He finished the training session with no pain, watched all the while by Doc Amprino.

Tomorrow, Les Gones will take on the famous Col de l’Iseran: an exercise the squad was well wary of. “it won’t be easy,” said Anthony Réveillère before shouting out some helpful words for the new recruits: “You’ll have to be tough mentally up there today, but above all… don’t forget some music because you’ll be asking yourself some pretty tough questions up there on the bike.” Toulalan decided to “go all the way up without letting my feet touch the ground.” See you tomorrow, way up the top.

[IMG42211#C] There was a good feel on the morning run. The 3 laps of the lake were easier this time despite the cold. The snow intensified once the Olympiens got back to their hotel.

[IMG42212#C] But it didn’t spare them in the afternoon for technical training exercises, so the OL delegation headed for Bourg Saint-Maurice to find better working conditions.

[IMG42213#C] The keepers had a specialised session with goalkeeping coach Joël Bats.

[IMG42214#C] Training finished around 18:00. Weather permitting, the Olympiens should head off for the Col de l’Iseran at 09:30 tomorrow morning.