Physical conditioning in the morning, then ball work 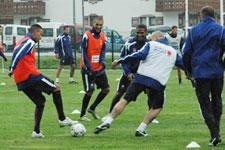 3 sessions were held on Wednesday July 3. After a run in the morning, Les Gones returned to Lake Le Rosset, this time without bikes, before kicking some balls in the afternoon.
There was a fresh breeze, a mist of rain and the sun was hidden by clouds. Wiltord and co did 3 laps of the lake. “I’m half dead, but I made it!” shouted “Nino” at the end of the run. But it wasn’t over, according to him: “It’s tough, we know that. But you have to stick it out and be tough mentally. I’m going to try a new technique: find a group of runners and stick to it no matter how tired I get.”
Anthony Réveillère, also has his own technique: “All I need is a good playlist on my MP3 players, and away we go”… each to his own.

Getting more serious, Les Gones did 3 laps of the lake at 11:00, told to each find their own rhythm and stick to it. Some players came close to Jean-Marc Chanelet’s record of 27 minutes.

Breathing hard, the OL squad returned to the hotel to wait for the rain to stop. “It's a good kind of tired,” explained Anthony Mounier, who was back in training after 3 months out and a tough end to the season (shoulder operation).

In the afternoon, the Lyonnais did some ball work: dribbling, juggling, passing, one-touch and two-touch play, finishing off with ball retention exercises, all done in great spirits. At the end of the session, the players were all made to do 10 push-ups. Christophe Galtier was smiling at the end, happy with the players’ efforts: “It was a good day,” the assistant coach said, “the players were joking around a lot during the exercises, which shows that the group is forming well and that the new players are integrating quickly. They were in high spirits and well concentrated despite the greasy pitch and the tough weather conditions.”

The Olympien delegation returned to the hotel on the blue and red bus for a well-deserved rest. Tomorrow… same again.

[IMG42208#C]
Endurance training in the morning. The OL squad did 3 laps of the lake at a moderate pace. The players averaged about 12 minutes per lap… while the fastest pulled times around 10 minutes.