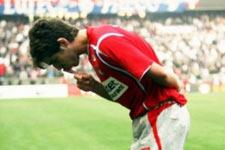 The summer break will be punctuated by one letter and one word per day. Today’s instalment is brought to you by… the letter Z for…
The most zealous OL fans thought for most of the year that OL could win every competition it was contesting. They thought there were no problems all season long and that OL would register a record season quadruple, making an indelible mark on the history of French football. For these supporters, Olympique Lyonnais was at its zenith.
Then all of a sudden, the remorseless winning machine began to zigzag like a car on 3 wheels. The true fans stuck with their team while others railed and moaned. Others jumped ship, thinking OL had turned into a team of zeroes. But we must remain zen.

Some people took their criticism so far it was as if OL, who, despite losing 3 and drawing 1 in January, still had a 9-point lead over 2nd place, were on the verge of the relegation zone. For the record, in round 23, when OL lost to Troyes, Lyon had a 30-point over the highest-placed relegation candidate.

Having zoomed in on this season, it is apparent that OL was by no means an undeserving champion. Sure, there were some hiccups, but they did win a 6th consecutive title.
In round 36, after the match against Lens, Gerland turned into a veritable zoo, with a majestic pair of lions brought in for the title celebrations.