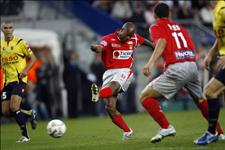 Sure, it’s been done before, and everyone will object to the use of “Nino” to illustrate the 23rd letter of the alphabet.
Sure, it could have been Winnie. Or even Waterloo could have been apt… with Luciano Spalletti in the role of Wellington… It’s true that Gérard Houllier’s last European match in charge of OL, after having taken the club to the quarter-finals in 2005-06 and after producing a group phase full of promise, will remain a blight on season 2006-07. OL had “only” to beat AS Roma to be able to continue spreading their attractive team play around Europe, spreading their influence, suffocating in its French context, around the continent.
The 0-0 draw in Rome pointed to a very different eventuality. At Gerland, after 45 minutes had been played, hope went from one side to the other and complexion of the match changed entirely. It was the moment Gérard Houllier chose to bring on Sylvain Wiltord. But the determination and thirst for victory of the OL number 22 wasn’t nearly enough. Ten days earlier, “Nino” had saved his side’s blushes at home against Sochaux, scoring OL’s second in stoppage time and then drawing the penalty that allowed the Lyonnais to claim a draw (3-3).

The rest of the season was tough for the man who had conquered Gerland in his first 2 seasons at OL. Starting only 3 of OL’s last 12 matches, he was left in Lyon for the trip to Paris on May 6, 2007, and didn’t appear again all season in the OL shirt. Quite a turnaround for the man whose first 5 months of the season saw him score the winning goal on 4 occasions: Bordeaux, Sochaux, Le Mans and PSG.

[IMG42190#R]Over 3 seasons, “Nino” made history at OL: that definitely deserves a letter! With 20 goals in 82 L1 matches, the native of Neuilly-sur-Marne made a big contribution to the securing of his 3 French titles. But that isn’t the only way the polyvalent forward, who can play anywhere across the front line, a player who wins matches, contributed to the club. He has a great first touch and the knack of pulling the right move at exactly the right moment, like on the soggy pitch at Sochaux or in Prague in season 2004-05: he has an innate feel for the ball and thrives under pressure. And he hates to lose – always the hardest worker in training, he never gives up, embodying in fact the never-say-die attitude that has permeated OL for some years.

Will Sylvain Wiltord still be with the club when training resumes on July 2? It seems unlikely. But should he stay, don’t be surprised to see him getting on the end of a Juninho free kick in the dying moments of a Champions League knockout match…
Facebook
Tweet
Forum