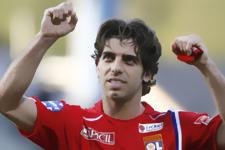 It’s as if time had stopped. The streets are empty. Nature seems once again to have the upper hand over man. Silence reigns.
For some time there have been no shots fired, no bombs and no fighting. The engines have stopped. The world hangs, suspended. In this eerie silence, an event of the utmost importance is taking place.

It’s the program that has attracted the largest audience of any show in 2009 – the Champions League final, in which OL beat AC Milan. They figured that football would bring people together more than anything else in the world, that it perfectly unites all human characteristics. Love, hate, altruism, egotism, madness and passion. They decided to give us one last challenge before the final invasion. A football match, to prove once and for all the superiority of their civilisation over ours. OL, winner of the Champions League and tine Intercontinental Cup, was chosen. The stakes were high, but simple. The winner keeps the planet and the loser leaves.

Stade Gerland, September 2009, late afternoon. In the stands at each end, the most fervent supporters, the most senior season ticket holders. In the stands along the touchlines, the most eminent political and religious representatives on the planet. The players take the pitch amid an indescribable atmosphere. A magnificent fan display representing every nation on earth unfurls and the 40,000 fans get to their feet, hands raised. All over the world, squares and plazas are filled to bursting with people watching the game on giant screens.

The whole world holds its breath. The match begins. The first challenges are hard fought and the game is tense, clumsy. The teams are feeling each other out. They are big, muscular and intimidating but we are lively and highly skilful. This clash of extremes is no stalemate. Coupet sees a shot bounce off the post and the frame shatters. It will have to be replaced. But that’s okay, it’s half time. Having resisted the severe physical impact of their opponents in the first half, OL steps up the tempo. Stepovers, rollovers and double touches set the Gerland crowd going but the score doesn’t change. Stoppage time begins, and OL wins a free kick 30m out. Final change: Juninho enters the game, and 40,000 fans jump to their feet to give everything they have to urge him on. All over the world, people do the same… the energy is great the ground begins to shake. Juninho focuses and steps up to the ball…