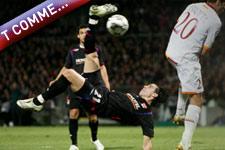 The summer break will be punctuated by one letter and one word per day. Today’s instalment is brought to you by… the letter
Tiago has had a faultless time at Olympique Lyonnais… He arrived from London in August 205, fresh from winning an English league title. The Portuguese midfielder just finished his second season with Lyon with another French championship title.

The native of Viana Do Castelo was once again this season a major player in Gérard Houllier’s squad… Signed by Lyon to cover the departure of Mickael Essien for Chelsea, Tiago Mendes Cardoso was the perfect foil for Juninho in the OL set up.
Despite a niggling back injury that troubled the end of his season, Tiago was a crucial player, doing an immense job in the defensive sector as well as having a strong influence going forward. The former Benfica player played 27 league matches for a total of 4 goals: apart from his 2 strikes against Nice and Lorient at the very beginning of the season, Tiago played a big part both editions of the derby against St-Etienne. In the first, at Gerland, he opened the scoring against Les Verts before Juninho clinched the win at the death. But the goal he scored in the second derby at Geoffroy-Guichard was the one that sticks in the memory: the Portuguese midfielder had already tried the move several times, going as close as hitting the post against AS Nancy-Lorraine. This time however, it was a complete success. Jérémy Janot was rooted to the spot; the St-Etienne keeper had a box seat to watch Tiago’s stroke of genius fly into his net. “It’s really the best goal of my career,” confessed the Portuguese, “I had tried it before, but it came off at the best possible moment. Scoring in a derby, and especially like that, it’s extraordinary”.