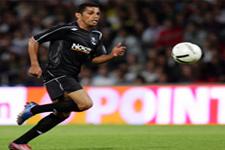 The summer break will be punctuated by one letter and one word per day. Today’s instalment is brought to you by… the letter S for... Sonny
He said goodbye to his footballing career on June 11, but not before taking the time to lash 3 goals in to the net at Gerland. Evidently, Sonny Anderson will remain the man who took OL towards the summits, but his glittering career saw him play at many other clubs as well.

Vasco de Gama, the beginning. The native of Goiatuba made his debut there at 17 years of age. He cut his teeth in 4 seasons there, winning the national title in 1990 before moving to Guarani for 2 seasons. Little known in his own country, the man who became known as Sonnygoal decided to move to Europe.

Servette de Genève, the adjustment period. In 1992, when he arrived, the Brazilian quickly built a solid reputation top-scoring in the Swiss league with 20 goals from 35 matches. He got 11 goals from 17 matches the next season, giving Bernard Tapis to buy him mid-season and install him at OM.

Marseille,the explosion. At the end of 1993, Anderson Da Silva, aka “Sonny” arrived on the Cannebière as an unknown in French football. And it didn’t take him long to put smiles on faces, even that soon after the VA/OM affair – by scoring 16 goals in 20 league matches. But the Phocaean club was forced down to D2 and couldn’t afford to hang on to their Brazilian wonder boy.

Monaco, the ascension. ASM, an ambitious club managed by technician Arsène Wenger, welcomed the Brazilian centre-forward at the age of 24. Surrounded by prestigious players (Rui Barros, Enzo Scifo, Youri Djorkaeff, Emmanuel Petit, etc) as well as budding youngsters Thierry Henry and David Trézéguet, Sonny hit top gear. He scored 51 goals in 3 seasons in the red and white, winning the league 1996-97, his last season on The Rock.

Barcelona, the transition. Arriving as a mature player, Sonny Anderson was thrilled to join one of Europe’s biggest and most powerful clubs. Amid a constellation of stars (Kluivert, Stoitchkov, Figo, Rivaldo), it was tough for the Brazilian to stake his claim, especially as his job was to replace Ronaldo, who had just left for Inter Milan. Though he only had a handful of starts, Sonny scored 16 goals in 2 seasons in La Liga and 5 goals in 11 matches in the Champions League. He won 2 Spanish championship titles plus one Spanish Cup and one King’s Cup.

Lyon, the confirmation. The arrival of Sonny in the capital of the Gauls marked a turning point in the history of the club. Despites a modest start due to his average physical condition, the Brazilian quickly rediscovered his scoring form. In his second season at OL, Sonny won the Coupe de la Ligue (the club’s first trophy since 1973). In the 2 seasons that followed, it was the championship title that Sonny’s OL won. In Lyon, Anderson isn’t just remembered for his stunning statistics (71 goals in 110L1 matches over 4 seasons) but for several images that will never fade. Impossible to forget his hat trick at Gerland against FC Bruges in the UEFA Cup, his subtle stroking of the ball into Stéphane Porato’s goal and his goal against PSG, a stunning rocket from 25m that still gives Jérôme Alonzo nightmares.

Villareal, the distraction. At 33, the man the Spaniards called “El Pistolero” decided to return to Spain, with the Yellows of Villareal, a club on the make where pressure was low and Sonny enjoyed himself. He scored 12 goals in La Liga and 6 in the UEFA Cup in his first season and played in the losing UEFA Cup semi-final against neighbours FC Valencia. The following year, his body began to give out and he decided to hang up the boots just 3 months into the league season.

Qatar, the excursion. Still loving the game that gave him so much, Sonny responded to calls from Qatar, returning to the game there with Al Rayyan, the club with which he ended the season as top scorer. The stadia were almost empty but the lifestyle was good, so Sonny signed on for a season with Al Gharrafa in Doha, his final club as a player.

Two banners that were seen at Gerland for Sonny’s testimonial match sum up what Sonny meant to the OL fans. “Great players come and go, but the legends remain. We won’t; forget you, Sonny” and “Lyon dreamed it, Sonny did it…Thank you”.
Facebook
Tweet
Forum