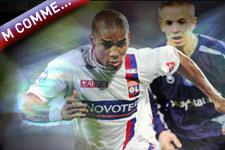 The summer break will be punctuated by one letter and one word per day. Today’s instalment is brought to you by… the letter M for… Malouda
After cutting his teeth at Châteauroux and then Guingamp, Malouda moved to OL, and has been here for 4 years.
The man from Guyana is today a complete player and lights up not only Olympique Lyonnais but the France national team as well. Indeed, he was one of Gérard Houllier and Raymond Domenech’s most-utilised players this season. In the league, he played 35 matches, starting 27 and scoring 10 goals. In the Champions League he played all 7 matches and scored 2 goals. That’s 3,600 minutes played and 13 goals scored from 118 shots in the 54 official matches he played fro OL in 5 different competitions. For “Les Bleus” he started 10 times… out of the 11 matches played this season, scoring 1 goal in his 812 minutes played, the most for any player… 2 more minutes than Coupet and Abidal.

A finalist in the World Cup as well as the League Cup, Malouda was also Champion of France for the 4th consecutive year and elected by his peers as the best player in Ligue 1. The model of the modern player has had an enormous season. M for modern, in terms of his physique, his power, his technique… and his polyvalence. Played up front to cover Fred, Carew, and Benzema among others as they recovered from injury or served out suspensions, the left winger took control, successfully occupying a forward role against Lens, Nancy and then Monaco.

M for model in terms of his reliability, his kindness, his altruism and loyalty to the team. A smiling joker, a father of 3 and captain on numerous occasions. The native of Guyana has a mean dribble, takes on the man, breaks fluidly down the left and has a strong headed game, all the wile remaining relaxed and confident… He likes zouk, salsa, reggae, Haitian and African music… Malouda is a ray of sunshine, a new star…
Facebook
Tweet
Forum