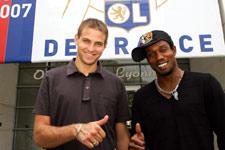 Lillois Abdulkader Keita and Mathieu Bodmer have both signed with Olympique Lyonnais for a period of 4 years at total cost of €24.5m. Their arrival was made official this morning in the presence of Jean-Michel Aulas and Bernard Lacombe.
“With the arrival of Alain Perrin, Gérard Houllier’s work concerning the transfers of Kader Keita and Mathieu Bodmer has been seen through,” confirmed Olympique Lyonnais President Jean-Michel Aulas. He continued, “They have been brought in to reinforce the Lyon squad for a period of 4 years. The transfer represents a considerable investment that signals the club’s ambition, as the signing of Kader Keita involved the biggest transfer fee Olympique Lyonnais has ever paid, greater than that for Sonny Anderson several years ago. The total of the transactions of €18m and €6.5m comes to €24,5m.

It’s an important investment that demonstrates the club’s ambition; OL wants not only to reign at the summit of French football, but to achieve a number of goals in Europe as well.

We now have a squad of 32 players, including 20 first-team internationals, 8 U-21 internationals and 2 U-19 internationals, which is proof of the club’s ambition.
We have this season, as in the past, especially if we add these 2 signings to the arrival of Nadir Belhadj, continued to invest in French clubs. Lyon strives to have the best players in its squad while augmenting the investment capacity of French clubs. This season it’s almost €30m that we’ve invested in the French league, which will help the L1 as a whole to consolidate its position. OL plays a role of economic dynamism on French football. Our sporting ambition materialises through good results, which have propelled OL towards the slight advantage it now has over its competitors, but at the same time, you have to now how to renew the team. And it’s not done by accident – in the last 10 years, OL has spent €270m on transfers, not including today’s signings. This demonstrates our investment capacity and strong financial health but also that we stimulate the market both in France and greater Europe.

Kader Keita is the club’s biggest-ever signing. There was a very strong desire to bring him here, having come very close to signing him last year. We were prepared to make an important investment, and it is reassuring that Bernard Lacombe, who is rarely wrong, Gérard Houllier and now Alain Perrin wanted this player. So did the entire recruiting committee, which is why we spent €18m on the transfer.

Mathieu Bodmer can play in several positions. He is a very promising player and we all hope his arrival here will open doors for him, such as that of the France national team.

As for the departure of Eric Abidal, he has known my position from the start, and we strongly hope he will be with us next season. We’ll have discussions together and we will try to convince him of the ambitions we have for him. We’ve shown recently that we are capable of holding onto our top players: Coupet, Réveillère and Juninho all extended their contracts. We have the same ambition for Eric and in general, when we take a position, it stays taken unless unforeseen circumstances intervene. We’re pretty sure that Eric won’t be going overseas this season. He’s an intelligent lad and he saw that Barcelona stalled at the asking price of €9m, which was their way of saying ‘no’. Besides, the club has just re-signed its 2 regular wing backs.

Malouda? He is more likely to leave. For the moment we haven’t reached an agreement but there is no certainty. We want to field a team next year even stronger than the one this year, which doesn’t give us much room to move.

As for Tiago and Diarra, we brought in Fabio Santos and today Mathieu Bodmer has arrived to play in a position similar to Tiago. So, should we have to replace either of these players, the replacement is already here. Alou Diarra, who has expressed a desire to leave, could do so in the coming days.

The recruitment campaign is almost over, taking into account our position on Eric Abidal. There may be one more player to arrive. I won’t tell you anything about him because things haven’t been settled yet, but they are well advanced. We think this gives us the best squad we’ve ever had, but only the future can say for sure.”