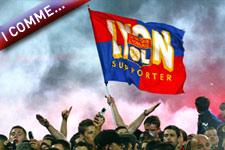 The summer break will be punctuated by one letter and one word per day. Today’s instalment is brought to you by… the letter I for… Illegal/Index…Intoxication.
Tackles from behind, shirt-pulling, hand-ball, raised feet, dissent, unsportsmanlike gestures, unsportsmanlike attitudes, abusive language… there are many forms of illegal comportment. However “I” is also Index, as the finger has often been pointed at the refereeing this season. In all the cases of illegal conduct, the LFP has tried to employ common sense. Video? A 5th referee? Retroactive sanctions? The “I” of Inquiry may also have its place.

Faced with this pessimistic list of unfortunate “I”s, why not include “I”… for Intoxication? And it’s an intoxication of the senses that is meant here. Like the one the OL players have had to come down from at the beginning of each of the last 5 seasons, as they set out to defend their title. And now a 6th in a row. The 19 other teams in L1 knew this season that OL was the only likely successor to its own title as French Champion.
Which is great for the OL fans, and not so great for the fans of the rest. While some fans get drunk, OL fans become inebriated through joy, and they do it well. Juninho now has his song, Caçapa had his tears, Sonny broke down at his testimonial, Aulas was applauded, Houllier’s name was chanted and Abidal applauded on hist last match. The fans worked overtime, putting on some magnificent displays, like the cloud of confetti against Le Mans, the Fourvière banner on December 8 against PSG, the pompoms (Lorient), the banners covered in OL faces across the whole northern stand (Le Mans), the festival of flags (Lens), Asterix and the Gauls (AS Roma), the Bad Gones (ASSE) and Champions (Lens) banners, signs in support of Baros (Auxerre), the map of France (OM) and the giant “VI” on the north stand while the south depicted a plane designed to take OL to the stars in 2008 (Nantes).
So many beautiful images, all accompanied by chanting and a melodious racket… that went as far as the capital for the final of the Coupe de La Ligue, a trophy that OL had within its grasp but couldn’t hold in its arms. But the stands at Gerland didn’t empty as a result – on the contrary…

One gets the feeling that OL has been perfecting itself over the years. The squad has all the qualities that promise even more amazing experiences. The Cups? OL can’t wait for next season and a chance to dot their “I”s!