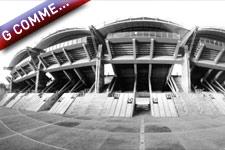 The summer break will be punctuated by one letter and one word per day. Today’s instalment is brought to you by… the letter G... for Gerland.
Gerland, that’s the name of the stadium that has hosted every OL home match since the club’s inception in 1950. Gerland is also the name of the area in which the stadium is located, and even though we associate the stadium with the club today, it existed well before OL was created. The first stones were laid in 1914, by order of Tony Garnier, for the World’s Fair. The Mayor at the time, Edouard Herriot, hoped to rejuvenate Gerland, the little-frequented industrial area of Lyon. “Building a hospital is helpful; building a stadium is planning ahead,” he said in defence of his project.

93 years later, Gerland has change immensely. In the beginning the football had to adapt to this Olympic stadium before it was transformed little by little into a true football stadium. Its last makeover was for the World Cup in 1998, when two stands were rebuilt. The neighbourhood has also evolved. The former industrial area now houses the Ecole normale supérieure de Lyon and the Ecole normale supérieure de lettres et sciences humaines. For several years now, fans have been able to get to the stadium on the metro.

It is often said that football is a reflection of society. The stadium of Gerland is a symbol of a modernised area, a club that has come into its own and a city that has developed a taste for football. ‘Bourgeois’ Lyon, as people like to stereotype it, is living a love affair with the world’s favourite sport.
Since its inauguration in 1926, the stadium of Gerland has hosted the most prestigious of competitions: the Inter-cities Fairs Cup, the UEFA Cup, the Cup-winners’ Cup (1986 final), European Championships, the World Cup and the Champions League. Over time, these various events have led the people of Lyon to develop a taste for the game dominated in France by Olympique Lyonnais. In the French footballing wilderness for many years, OL is now among the continent’s biggest and finest clubs – to the point that Gerland now seems too small for its champion team.

[IMG30273#R]IN 2010, OL will cut the umbilical cord and fly on its own two wings. Proud of all that has happened within its walls, the Stade de Gerland will have to now turn itself to other activities, holding onto its memories… like France-Denmark in the 1998 World Cup, OL-Inter Milan or even OL-Real Madrid in the Champions League and the tragedy when the Indomitable Lion Marc-Vivien Foé passed away on the pitch, as well as the love between the OL fans and their former idol Sonny Anderson when he played his last match for the club. Or even the pride of the people of Lyon as they received the trophies for being the Champions of France.
Facebook
Tweet
Forum