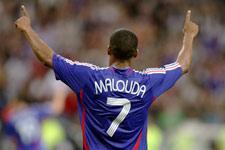 The France team played 11 matches this season. One player played in every match: Florent Malouda. The Guyanan started 10 of those games and came on as a substitute in the friendly match against Austria at the Stade de France.
The second-most used France player was also Lyonnais. Eric Abidal made 10 appearance for Les Bleus this season. He is closely followed by Grégory Coupet, who wore the gloves 9 times for France, followed by Lilian Thuram and William Gallas.

The rankings of time played is also entirely Lyonnais: Florent Malouda played the most minutes for Raymond Domenech (812 minutes). Followed again by Eric Abidal and Grégory Coupet (both with 810 minutes). François Clerc was the only player to replace Willy Sagnol (620 minutes played for the Bayern player, 370 for the OL right back).

Sébastien Squillaci received regular call-ups by the France manager. He started against Argentina and played all 90 minutes.

Alou Diarra came on for the second half of a friendly match against Greece (45 minutes).

Season 2006/2007 also saw Karim Benzema take his first steps for the national team (46 minutes). Brought on as a replacement at half time against Austria and against Georgia, the OL striker scored his first goal for the national team.
br> Two attackers share the lead on the goal scorers chart for Les Bleus, with 3 each: Nicolas Anelka and Thierry Henry.
Sidney Govou scored 2 goals against Italy.
Florent Malouda and Karim Benzema each scored 1 goal.
Facebook
Tweet
Forum