France does the job 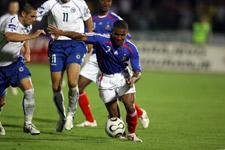 The France team ended its post-World Cup season as it began: with a victory over Georgia. 6 Lyonnais took the field for this match.
3-0 winners in Tbilisi for the opening round of Euro 2008 qualifiers, Les Bleus made do with a 1-0 victory in the return leg in Auxerre. Samir Nasri secured the win for Raymond Domenech’s men with a strike in the 33rd minute.

4 Lyonnais took the field for the start of the match: Eric Abidal, François Clerc, Jérémy Toulalan and Florent Malouda. In the first half, Jérémy Toulalan shot twice from distance, blazing over both times (16’ and 27’). At the very end of the first half, Florent Malouda sent his header across the face (45’). In the second half, François Clerc came close to doubling the lead but failed to hit the target after latching on to Franck Ribéry’s free kick, which had been flicked on by William Galas (47’).

In the second half, Florent Malouda made way for Djibril Cissé (65e). In stoppage time Sidney Govou and Karim Benzema came on for Franck Ribéry and Nicolas Anelka.

After this win, Les Bleus have 18 points from their 7 matches, 2 points ahead of Italy and 3 ahead of Scotland, which beat the Faroe Islands 2-0 at the same time. Meanwhile the Italians beat Lithuania thanks to the strong form of Luigi Fabio Qaugliarella of Sampdoria, who scored 2 stunning goals, with no reply from the hosts.

The end of winter will be decisive for Les Bleus. The French and Italians will face off September 8 2007. On September 12, at the Parc des Princes, Raymond Domenech’s men will host Scotland. Before that they will meet Slovakia in a friendly match on August 22.
Facebook
Tweet
Forum