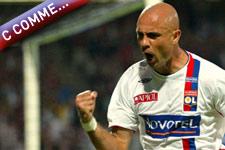 The summer break will be punctuated by one letter and one word per day. Today’s instalment is brought to you by… the letter C... for Cris.
It has already been 3 seasons since Cristiano Marques Gomes, known as Cris, came to Lyon from Brazilian club Cruzeiro. He threw himself into another European adventure after a poor spell at Bayer Leverkusen. And his mission was a tough one: replacing his compatriot Edmilson in central defence, a tough act to follow. But any doubts were short lived and Gerland quickly fell under the charm of the native of Guarulhos as L1’s attackers got to know the “Policeman” on the pitch during his first 2 seasons at OL.

During his 3rd season at Lyon, Cris has once again impressed with his power, his anticipation and his application: 32 L1 matches and 7 Champions League appearances as well as 4 starts in the Coupe de France for a total of 44 official matches in the OL shirt. He was the player used most by manager Gérard Houllier this season as well as the most-sanctioned, collecting a total of 13 yellow cards.

[IMG41224#R]Cris’s season was also punctuated by 4 Ligue 1 goals, scored against Troyes, Valenciennes, Paris Saint Germain and Lens. This last goal, at the Stade Bollaert, marked a turning point in the season as OL clinched their 6th French title and Cris his 3rd. And just like his club, the Brazilian won’t want to stop there. Before leaving for a month’s rest and recreation in Brazil, the OL defender made an appointment: “I’ll be there on July 2, you can count on that.” We can take his word for it
Facebook
Tweet
Forum