B for… Brazil, breath of fresh air... BG 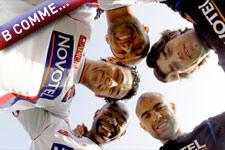 The summer break will be punctuated by one letter and one word per day. Today’s instalment is brought to you by… the letter B… like Brazil, breath of fresh air and Bad Gones.
This is nothing new; Brazil has been a big part of life at Olympique Lyonnais for several years now. From Marcelo to Fabio Santos via Edmilson and Juninho (to name just a few), the Brazil contingent has always been at ease between the Rhône and Saône. A contingent that took centre stage on July 1 2006… Who could dream of anything better than a World Cup quarter-final between France and Brazil with no fewer than 8 Lyonnais on the match sheet – of which Jean-Michel Aulas obtained a copy. 5 Olympiens played (Abidal – Malouda – Wiltord – Govou and Juninho). The France team won 1-0 thanks to Thierry Henry strike. The match marked the final international appearance of Juninho. Les Bleus continued their adventure to the final, losing out to Italy (1-1, 5-0 on penalties).

B… for breath of fresh air.There are many rituals undertaken before taking the field. While in France breaths of fresh air are limited to short walks around the hotel on the day of the match, the Champions League offers the Lyonnais some more diverse visits… A stroll, usually the night before a match. This year, the Olympiens saw some wonderful sights in destinations as beautiful as they were different. From Ceaucescu’s palace in Bucharest to St Sophie’s Cathedral Kiev via Rome’s Colosseum and St Peter’s Basilica… the flashes would have been working overtime, with aficionados like Juninho, Grégory Coupet and Joël Bats on the tour. According to Patrice Bergues, the strolls give the players “a chance to clear their heads, to change their ideas before a competition”.

[IMG42082#R]B… for Bad Gones. Founded in 1987, one of France’s oldest supporter groups will celebrate its 20th birthday at the end of the year. Again this season, the members of the Kop Virage Nord have chanted long and loud and put on some of the most impressive fan displays like the one featuring a map of France accompanied by the phrase “It’s all ours” (at OL-OM) or the one with the letters “OL” covering the entire stand (at OL-Kiev)… Congratulations to all the BG members for this beautiful season and, in advance, for their birthday!