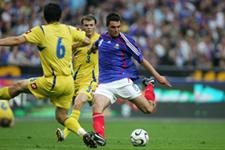 11 Lyonnais played with their national teams, including 5 who started for France against the Ukraine. Tiago’s Portugal won an important victory in Brussels. Loïc Rémy scored again for the U-20 side.
[IMG41392#L]Thanks to goals from Ribéry and Anelka, the France team beat the Ukraine 2-0 and went to the top of the group B table, 2 points in front of Italy, which beat the Faroe Islands 2-1.

[IMG41393#L]In group A, Portugal and Tiago won a precious 2-1 victory in Belgium with goals from Nani and Postiga. The OL midfielder played the entire match.
Felipe Scolari’s men remain in 2nd place on the group A table, 5 points behind Poland (which has played a match fewer), which won 3-1 in Azerbaijan.

[IMG41962#L]In group D, the Czech Republic drew 0-0 with Wales in Cardiff.
Milan Baros started but was replaced at half time by Marek Kulic. The Czechs will be left ruing their inability to score, as Germany, which won 6-0 in San Marino, went 2 points ahead of them on the table.

[IMG41390#L]At the Parc Saint-Jacques, Switzerland drew2 1-1 with Agrentina in a friendly match. Patrick Müller played the entire match in central defence, drawing the praise of the Swiss Football Federation on its website: “The Lyon player was perfect n the centre of defence. At 30 years of age, and playing rarely for his club, he is truly indispensable.”

[IMG41392#L]Yesterday in Brest, the France U-21 side conceded a 1-1 draw with Romania in its first qualifier for the European U-21 Championships in 2009. Hatem Ben Arfa came on for Payet in the 50th minute.

[IMG41392#L]Two days after beating the Ivory Coast, the France U-20 side qualified for the semi-finals of the International U-21 Football Festival of Toulon by beating Japan 5-1. Loïc Rémy played the whole match and scored France’s 4th goal, his 2nd in the competition. Sandy Paillot came on in the 48th minute.
The Bleuets will play their semi-final on Thursday June 7.
Facebook
Tweet
Forum