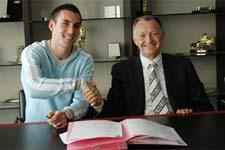 Anthony Réveillère signed a new 4-year contract with OL, keeping him at the club until June 2011.
“I’m very happy to extend my contract,” declared the OL right back. “It’s something I hold dear. There was a gentleman’s agreement with the club president and the club. I made my decision a little while ago but we wanted to wait until the 6th title was won and the festivities over..”

The native of Angers spoke about the basis for his decision: “When you play at Lyon, you are always contacted by other clubs, but OL is the best club in France, one of the best in Europe. It’s got to be something special to make you want to leave. My choice was made in favour of stability. There wasn’t much question really.”
Among the reasons that led him to stay at the club was his desire to play for Les Bleus as quickly as possible. “When you play for Lyon, you have ambition,” he admitted. “Mine is to get back into the national team. I have the possibility with OL. I want to improve, to get off to a good start. The confidence the club has shown in me gives me even more desire to move forward.”
In competition with François Clerc for the right back position, Réveillère remains confident: “We have no choice. At Lyon, competition is part of the game. You have to work hard and perform well to get into the team. Alternation was Gérard Houllier’s way. There are other managers who work differently. In any case I have an immense desire to start next season and give my all. After that, you just have respect the manager’s choices.” ».

In attendance with Bernard Lacombe, OL President Jean-Michel Aulas was evidently satisfied with the extension of the 4-time French champion’s contract. “The fact that our best players are re-signing gives us confidence,” he rejoiced. “It’s an expression of stability. You always need stability.”
Anthony Réveillère could well be joined by defensive colleague Cris in re-signing. “I saw him yesterday and we agree to continue our discussions. He has some conditions that we’ve done a lot of work on,” said Jean-Michel Aulas, who deplored the contact that Juventus has made with the Brazilian, “driving his price up”. “Cris wants to stay,” he revealed. “We will come to an agreement in the coming days, or even hours.”
He also made a few comments as to the identity of the future OL manager. “I’m not seeing Alain Perrin today. So no decision will be made before the end of the week. We are still in consultation. You can’t just replace Gérard Houllier like that. We have to think hard about a plan that will take us all the way. The choice is not yet made but it’s becoming clearer day by day. We’re working flat out. We’ll do it fast and well.”
Videos
Facebook
Tweet
Forum
Videos