The Champions wrap up 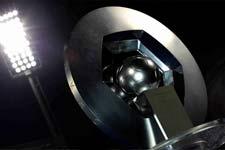 OL lived up to its title of champion by dominating FC Nantes Atlantique 3 goals to 1. Florent Malouda scored a double and Karim Benzema scored OL’s 3rd. On a night of huge celebrations at Gerland, the crowd paid emotional homage to outgoing captain Claudio Caçapa.
There were tributes for Gerard Houllier, Claudio Caçapa and Eric Abidal when OL was presented its championship trophy. The celebrations were enormous for a team always thirsting for success and trophies.
Before the final match of the season kicked off, Claudio Caçapa and Gérard Houllier received a trophy from Jean-Michel Aulas. Just beforehand, the OL captain had received standing ovation. As the teams were read out, Gerland stood as one to salute the player who captained OL to 6 consecutive French championships. The Nantais gave the champions a guard of honour as the 2 sides took the pitch.

Despite this encouraging beginning, the game was somewhat slow off the mark. With the exception of Juninho’s free kick, which hit the bottom of the post, and the loud cheers that resounded each time Caçapa touched the ball, there was little excitement in the first 15 minutes, so clinically were they dominated by Gérard Houllier’s men. What followed confirmed that in season 2006-07, a veritable gulf separated OL from the Nantais, as Karim Benzema confirmed the considerable qualities that have earned him a place in the France squad. After he had a shot deflected on the edge of the area (19’), the young forward saw one shot cannon off Tony Heurtebis’ post and another fly straight to Nantes keeper’s gloves (28’ and 30’). After Juninho hit the post, the young Olympien rounded the Nantes keeper twice (!) and came desperately close to giving his side a 2-goal advantage (31’).

Ten minutes earlier, L1’s player of the season Florent Malouda had opened the scoring (21’), volleying home a cross from former Nantais Jérémy Toulalan for his 12th goal of the season. The Guyanan could have widened the gap had his powerful shots not found Tony Heurtebis (34’ and 48’) and the night sky above Gerland (49’).

Les Canaris had until that point only proved dangerous on a handful of occasions, doing nothing to inspire any hope of ending their season on a positive note; only Oliech had forced a save from Grégory Coupet (26’). But the Nantais are a proud team and Diallo is not without attacking talent. After a one-two with Oliech, the Malian lashed home past Coupet (52’).

But it would take a lot more than that to derail an OL locomotive eager to please their faithful fans. Karim Benzema’s cross-cum-shot threatened the Nantes goal line (52’) and then Jérémy Toulalan fired just wide from distance. And then Gerland came to its feet as Claudio Caçapa made way for Patrick Müller (62’). Eric Abidal also received a Gerland ovation as he left the field for the last time (82’).

A few minutes earlier, Florent Malouda has put the OL train back on the right track. Perfectly released by a long pass from Juninho, the Guyanan won out in his one-on-one with Tony Heurtebis (66’). Somewhat abandoned by his rear guard, the Nantes keeper managed to repel efforts from Sidney Govou (71’) and the OL number 10 (85’) but cold do nothing to stop Karim Benzema’s angled volley (82’). At the other end of the pitch, Grégory Coupet denied Diallo and received a rousing salute from all of Gerland (86’).

At full time, the OL fans invaded the pitch to congratulate and commune with their champions. Bring on 2007/2008!
Videos
Facebook
Tweet
Forum
Videos