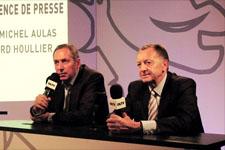 OL President Jean-Michel Aulas and Gérard Houllier held a press conference to announce the departure of the Lyonnais manager…
Jean-Michel Aulas:
“For a while, Gérard has been concerned about the weight of the task here at OL. Season 2006-07 will remain one of our best, if not the best. Gérard asked me on Wednesday night to free him from his contract one year early. After reflecting on it and thinking of the future, I accepted his request. I would like to thank him and his assistant Patrice Bergues, whose contract has come to an end. Gérard and I worked together very well. I would like to pay sincere homage to the manager and the man.”

Gérard Houllier:
“Everything happened in good faith, I made my decision in Athens. I vacillated for as long time before deciding. I drove a Formula 1 car that had won 4 grands prix, then won a 5th then an historic 6th, for reasons you well know. We progressed in these 2 seasons. Certain players progressed thanks to the work of the staff and possibly thanks to the philosophy I bring to the game. There is perhaps something different to bring to a stay of 3 years; 3 years that will be very important to the future of the club. I didn’t feel like staying. I had 2 exceptional seasons here that reminded me of what I had been through at Liverpool. I would like to thank the fans, who have been really fantastic. It’s for purely personal reasons that I am leaving, not for health reasons. I need a break, that’s it. I won’t go to another French club and absolutely not to a foreign club, either. First of all I will take a holiday; I need a rest. I’m not leaving because I don’t have enough guarantees, or power, or because I have problems with certain people. Tension? The road to success is paved with tension. But the future won’t be tougher for OL. The team will continue to grow and I’m convinced they will do even better in the Champions League. It’s the end of the cycle for an OL manager. I don’t have the time or the energy to stay longer.”

After making their statements, the President and the Manager answered questions.

Gérard, what is your favourite memory?
“There are many. Among them is out victory in Eindhoven. And what a party last week in St-Tropez.”

Will it be special against Nantes?
“Evidently. We wanted the fans to know beforehand. At OL, I kept the machine going. There was no break down or lag time. I’d like to take this opportunity to thank everyone at the club as well as the media. A word for my successor? Have faith in the players.”

Jean-Michel Aulas, where are you at in the search for the successor to Gérard?
“I’ve always said that we were alert. Forewarned is forearmed. It will be hard to do better than Gérard, but we are passionate about finding the right person. After all, we’ve won 6 successive titles with 3 different managers, and I have the ambition of winning a 7th title with a 4th manager. There are many managers who want to come here. We will try to react quickly and wisely. The structure is there already. The squad will change a bit but won’t be overhauled. The successor? Things will move quickly. We will reach a decision within a week.”
Videos
Facebook
Tweet
Forum
Videos