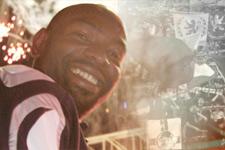 At the end of training, OL captain Claudio Roberto Caçapa gave his last press conference in Lyon after 6 and a half years of trophies, joy, laughter, fun and happiness that the Brazilian’s aura has brought to the club.
The captain is leaving the ship and leaves behind him an indelible mark on the French championship.
So Claudio, your last press conference in Lyon. Is it a special moment?
Of course, I’m conscious of making the most of the time I have left at the club. It starts now, I have 2 hours left to answer your question (laughs). I’m kidding but I’m trying not to think about it, to put all thoughts of Saturday out of my head. It’ll be tough, a very special moment. The manager confirmed that I will be playing. But even if he didn’t play me I would still go out on the pitch. We would have to play with 12 players!

Are you scared?
It hasn’t really sunk in yet that I will no longer be here. I know that my emotions may get the better of me during the match. Tears? I’m a sensitive person but I’ll do everything to stop myself from crying!
I’ll miss everything: the club, my team-mates and the friendship most of all! The city of Lyon as well, the church where I go 2-3 times a week… I’ll miss a lot of things, like the joyful moments that I won’t forget.
I came to France planning to stay for 5 months… and I’ve been here for 6 and a half years now. It’s my city, I am Lyonnais… I arrived as Claudio, but many people call me Claude now. I will remain Claudio, however.

My favourite memory? The Coupe de la Ligue. It’s my biggest trophy.
My future? I have several possibilities but I’ve made no decisions yet concerning my future as a footballer.
Playing in France? It’s possible. I’m a professional, even though playing in L1 could be difficult because I’ve won everything with Lyon.
A return to Lyon? I haven’t asked OL for anything, but if they were to offer me a return, I would do it with pleasure.
Coming back to watch games at Gerland? If I can get a ticket (laughs) I would love to.
A last word? A big thank you to the fans. They supported me when I played well but also when things weren’t so good, when I was injured, when I thought I wouldn’t play again, when I doubted myself…