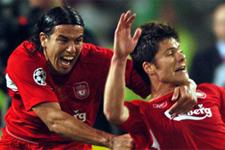 Milan Baros spent 5 seasons at Liverpool FC, which will tonight contest the final of the Champions League against AC Milan in Athens.
He started the match between the same 2 teams 2 years ago in Istanbul. The Czech international has unforgettable memories of that match.

“At half time, it was looking tough for us to come back, especially in as big a game as the Champions League final. And even more so against AC Milan. No-one believed in us, and it seemed to be over. Then Gerrard scored our first goal… and everything became possible again. We scored 3 goals in the space of 6 minutes… unbelievable. We weren’t thinking about the score any more, just about pressing up and trying to catch them.
That final is the greatest memory of my footballing career so far. It’s really in a league of its own, the dream of any footballer: to do the impossible.

As for tonight’s match, it’s really hard to know who will win. I wish Liverpool the best of luck, I’ll be supporting them.”