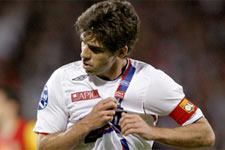 OL played its 52nd match of the season against Lens. The Lyonnais registered their 33rd victory… and kept a clean sheet…
33 wins, 12 draws and 7 losses… that’s OL’s record with 2 matches left to go (counting the Trophée des Champions as a victory). While OL equalled its record for league wins in a season (25, from last season), it couldn’t match last season’s figure for wins in all competitions, which stands at 36.

Govou scored his first league goal of the season (his 39th in L1). He has played 1,647 minutes since his last strike, which came against Le Mans. He played in 25 matches (20 as a starter) without scoring.

Lens is the 7th team this season to take no points from its 2 matches against OL. Lille, ASSE, Lorient, Sedan, Nancy and Le Mans are the 6 other teams in the same boat. The Nordistes have the catastrophic record against OL this season of 7 goals conceded and 0 scored!