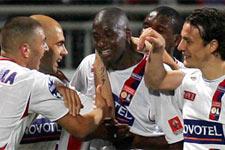 Olympique Lyonnais largely dominated its closest rival RC Lens throughout their match, coming out winners 3 goals to 0. Sidney Govou, who hadn’t scored in the league for a whole year, opened the scoring. Juninho and Alou Diarra scored the other 2 goals.
After the drubbing inflicted in the first half of the season (4-0), the Lyonnais followed up in style. Sure, the score line is slightly slimmer, but the impression of power and total control left by OL is quite the same as at the Stade Bollaert in the autumn.

If there were any fears that Gérard Houllier’s men would trail off at the end of the season and not take seriously the visit of a team battling it out for a European place, they were dispelled tonight by an OL that confirmed that, just one week after equalising against PSG in stoppage time, and despite just being crowned champions for a 6th successive season, they will stop at nothing to prove themselves worthy of their title right up until the last match of the season.

If Francis Gillot’s men were hoping to encounter an under-motivated OL side, they were probably disappointed by the wave of attacks produced by the team above them on the table. In their unquenchable thirst for victory, the French champions allowed their visitors only 12 minutes of respite. Just enough time for Karim Benzema to set the tone of the evening. After a series of stepovers, the young French international sent the ball smashing into Charles Itandje’s right-hand post. The ball rebounded for Juninho, but the Brazilian couldn’t get his effort on target (12’).
Visibly looking to live up their status as 6-time champions, OL kept up the pressure and hit the woodwork a second time. ON a Juninho free kick, Alou Diarra’s header slammed into the crossbar (17’).

And then the event that the more facetious supporters thought to be the big surprise promised by OL President Jean-Michel Aulas: Sidney Govou scored a league goal!
It had been almost a year, since the visit of Le Mans in the last round of season 2005-06, that Govou hadn’t scored in the league. Even though he often chose to simply smile when his goal drought was mentioned, there is no doubt that the France international would have been relieved to pull off his acrobatic scissor kick from Florent Malouda’s cross (21’).
Juninho then went close from distance (22’). But he was just getting started. On the edge of the area, Karim Benzema put the Brazilian through and his skidding shot hit the back of the net (38’). In doing so the OL captain scored his 6th goal in as many matches between the sides at Gerland.
The matched looked set to turn into a footballing lesson for Tiago and co and a nightmare for Seydou Keita and his team. A bad joke that turned truly tasteless in the eyes of the Lens keeper when Alou Diarra converted a penalty obtained by Tiago just before the break (45’).

At half time, the match seemed all but over. The second half contained little to change the course of the match that a conscientious OL side had rendered predictable by making it a point of honour to concede only the bare minimum of chances to Lens.

Karim Benzema missed 2 chances to add to the score (55’ and 65’). Sidney Govou was just centimetres short of François Clerc’s cross, missing his chance for another double this season, following the one he scored for France against Italy (60’). Then Florent Malouda’s powerful shot fizzed to the right of goal (78’). At the end of the match, one-on-one against Itandje, Jérémy Toulalan fired wide.

OL now has a massive 20-point lead over its nearest rival, OM, a figure that sees the Lyon club on track to set a new record by the end of the season. Added proof, if it were necessary, of OL’s domination of French football.
Now OL has the away wins record to go after in Monaco and then the visit of the recently relegated FC Nantes to light up Gerland once again. Sometimes we wish the season were just that little bit longer, just for the fun of it.
Facebook
Tweet
Forum