A matter of honour 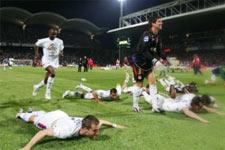 Since May 4 2002 and an unforgettable 3-1 victory in the ‘final’ of the 2002 L1 season, the matches between the Lyonnais and the Lensois have produces many memorable moments. And without a doubt, the coming instalment won’t buck the tradition…
“It will take us all the way back to Olympique Lyonnais’ first title,” confides OL President Jean-Michel Aulas. “For the final 2 home matches, the party will be doubly big. There will be a spectacle on the pitch but also, after the match, there will be an enormous surprise that will blow everyone away.”

Five years after the win that began OL’s uninterrupted domination of L1, the reception of Racing Club de Lens has a particular appeal as the sporting and festive dimensions connect. “ A title is qualified by the game you play,” says Gérard Houllier. “ Against Lens, we’ll have to play to win.”

That suits OL; since the beginning of the exercise, the Lyonnais have fared well against the side directly behind it on the table. After the stunning wins in Marseille (4-1) and in Lens (4-0), OL will take on its direct pursuer for the third time this season. ON Wednesday night, it won’t be a question of superstition but of honour; a matter of confirming on more time, as if it were necessary, that despite a difficult winter, OL remains the uncontested master of French football. “It’s a crucial match for them. Even if we’re playing without the pressure of having to get a result, we still have give our best,” notes François Clerc. “We’ll have to be at our best the whole time.” And show the same desire as at the Parc des Princes, when, almost in the role of killjoys, they equalised, for honour, with seconds to go, against a PSG in dire need of points. The French champions proved they won’t let anything slide this season. “We’re in great spirits,” reveals François Clerc, quickly echoed by his manager: “We saw against PSG that we will never give up .” By all accounts, OL version 2006-07 isn’t lacking in character. And should OL’s self respect mix with their desire to top the table of the second half of the season… A win against Lens would take them near the top of one of the rare tables they aren’t already at the top of (in the second half of the season, OL is currently in 4th place with 25 points. Toulouse leads the race (28pts). Then come Bordeaux (27pts) and Rennes (27pts)).

The other main interest of this encounter is an ethical one. A year ago almost to the day, a much-changed OL went down 4-0 to Lille in the penultimate round of the championship, drawing a litany of criticism. “You have to be champion all the way to the end,” underlines the OL right back. “It’s a false argument,” says Gérard Houllier who, this time around, has little choice in selecting his attack. The absences of Sylvain Wiltord, ill, of Fred, injured, and of Milan Baros, suspended, have forced Houllier to give Karim Benzema a start alongside Florent Malouda and Sidney Govou.

On the other hand, there is some good news for the OL manager: Juninho is back to scoring ways. Against PSG, the Brazilian scored his 11th goal of the season and his first since February. Against Lens at Gerland, he has the impressive record of 5 goals in as many matches. Should he continue his good form against RCL, and OL its mania for dominating the Lensois (RCL has 7 losses and a draw from its last 8 visits to Lyon, for a record of 17 goals conceded and only 3 scored!), the celebrations could be complete on Wednesday night.
Facebook
Tweet
Forum