OL doesn’t give up 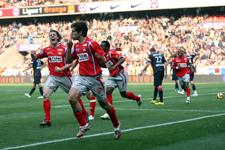 Behind for the whole of the second half, the Lyonnais managed to equalise in stoppage time, and with only 10 men. Latching onto a perfect cross from Govou, Juninho beat Landreau with an imperious header.
The Lyonnais didn’t return empty handed from their trip to Paris. Arriving in the capital with various records on the line, they returned with numerous certainties: not being able to equal the record for wins in a season; having only one match left, at Monaco, in which to beat the record for the number of away wins in a season; and knowing that their formidable capacity to get back into games in the dying minutes hasn’t completely deserted them. In stoppage time, with a header! Juninho took it upon himself to remind the men from the capital that, even when wounded (Kim Källström has a protractor injury and Fred is carrying a knock to the ankle) Lyon never lies down. The Parisiens have a legitimate claim to being disappointed, having led for most of the match.

With 41 points at the start of this game that pitted them against OL for the 4th time this season, the men from the capital were well aware that every point they could take from the sextuple champions of France represented a huge step towards beating the drop, a task that has become their obsession after a catastrophic first half of the season. For a long time, Jérémy Clément and co managed to avoid conceding. Proof of Paul Le Guen’s manifest desire to follow up on the clean sheet at Lens, the former OL manager fielded a formation with a reinforced midfield.

Just like in their match against Toulouse in round 34, the Parisiens, in the first half, left the initiative to their visitors. Milan Baros, in his last start for the season before his 3-match suspension, was the first to make himself apparent, but his header flew wide (9’). Kim Källström did only slightly better with his effort from distance (11’) then forced a save from Landreau before making way for Juninho after just 15 minutes of play. During the opening stages, largely dominated by the sextuple champions of France, Patrick Müller and François Clerc both found the gloves of Mickaël Landreau (12’ and 19’).
Grégory Coupet twice denied Pedro Miguel Pauleta his 13th goal of the season (22’ and 32’).
Just before the break, Florent Malouda saw his shot blocked by David Rozenhal (41’) before Edouard Cissé cleared the ball into the Boulogne stand (43’).

Despite dominating possession, the Lyonnais remained susceptible to the Parisian outfit that has been so tough of late, often scoring in the second half. And they stayed true to form after the break, with Edouard Cissé rounding Anthony Réveillère as he chested down Bernard Mendy’s cross and then opening the scoring with a powerful left-footed shot (47’).
The Lyonnais reacted immediately but without success. After a scramble in the PSG area, Fred shot from point blank range but somehow missed the mark (49’) and Florent Malouda missed his volleyed effort (50’).

For half an hour, the Lyonnais maintained possession without looking dangerous enough to have any hopes of equalising. Their eventual reaction was late but enough to force the Parisiens to share the points. Right up to the very end of regular time, helped along by a confidence that has stuck with them for the last few weeks after having deserted them in the first half of the season, Pauleta and co bent but managed not to break. Sidney Govou forced a fine save from Landreau (75’). Efforts from Florent Malouda and Karim Benzema went wide (77’ and 88’). Bernard Mendy cleared Juninho’s indirect free kick off the line (84’). Fred, who picked up an ankle injury, had to leave his team-mates to finish the match with only 10 men.
In the dying seconds, Sidney Govou delivered the perfect cross onto the head of Juninho, who made no mistake (93’). The Brazilian hadn’t scored since the visit of Sochaux in round 26.

Even though they had already secured their 6th consecutive title, the Lyonnais didn’t want to concede anything. There is still a record to pursue in the principality and a title to live up to against Lens and Nantes. With such drive and desire to win, OL’s end to the season should be spectacular.
Facebook
Tweet
Forum