Memories from the Parc des Princes... 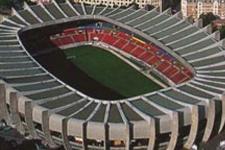 Juninho, who set up all the goals at the Parc, hasn’t scored since the visit of Sochaux to Gerland on February 24 2007. He will be up against Landreau, the keeper against whom he has scored his only goal against PSG. It was on October 2003 at Nantes; a shot from outside the area after he received a pass from Malouda. Lyon won 1-0. On February 1 2003, the same keeper denied Juninho’s effort from the penalty spot, ensuring a 0-0 final scoreline.
Facebook
Tweet
Forum