The OL squad for Le Mans 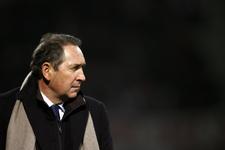 18 players have been called up by Gérard Houllier for the visit of Le Mans on Saturday. Returning to the squad are Fred, Govou and Alou Diarra...
The squad:

Gérard, will you celebrate the title?
“We haven’t covered all our bases yet. For me, the title was won after the visit of Rennes. And to win so early is fantastic. Now, it’s all a bonus. In Auxerre we played a good team game but didn’t finish well enough. Defensively, we were terrific.”

Do you have good memories of coming up against Le Mans ?
“Yes, but it’s not the same situation as it was last year. We had done a good week’s training featuring a lot of match practice. There was real intensity and commitment.”

What expectations do you have of Le Mans?
“I look after the team; I’m responsible for results. We always look to put on a show. When you really play the ball, it’s harder; you use more energy. For the rest, I’m no stage manager (laughing). We need love right now. Will the players paint their faces? If they do, they’ll b putting themselves under pressure. I’d be surprised if they were to. It’d be funny if the directors did it though! As for the rest, I don’t know how the team will be. For me the show and the result are the most important things. We have to play with panache, as champions.”
Facebook
Tweet
Forum