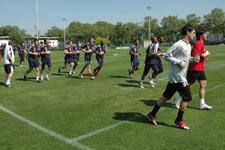 The 2007 Champions of France were back this afternoon following a day’s rest…
Gérard Houllier and his men met for an hour-long session under blue skies at Tola Vologe. They began with a warm-up then moved onto 6-aside games with a particular aim: scoring from volleys from inside the area… without goalkeepers. A deceptively simple task… In the end the blue team won, ahead of Sylvain Wiltord’s yellow team. Alou Diarra, Sidney Govou and Fred, all absent against Auxerre, were all present, as was Tiago, back from Portugal, where he accompanied his pregnant wife on the weekend.

The session was also notable for the progressive return of Karim Benzema… the OL attacker, who picked up an injury against Valenciennes, did laps of the practice park in the company of Bruno Genesio and should be back with the pro squad very soon.