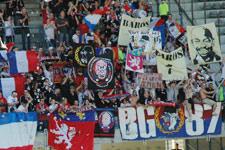 OL returned to Lyon in convivial style, far from the way they departed Gerland on Wednesday night.
Congratulated by the OL fans. Acclaimed by the locals… applauded everywhere. The King of France set about celebrating its 6th title in fitting style on what has been a happy hunting ground for the Gones in recent years.
Just over an hour before kick off, Duhamel and his men were the first on the field. Benoit Pedretti dropped by to congratulate his former team-mates. Flo Maurice met up with his mate Christophe Dugarry. Gérard Houllier was relaxed: “It’s beautiful, isn’t it? We’ll play 6 matches without any pressure. That doesn’t happen every year.” “Let’s enjoy ourselves,” repeated Coupet. “Go for it!” shouted Ben Arfa as he took the field at the Stade Abbé Deschamps. “It’s really hot. We’ll all struggle tonight, But the pitch is beautiful. A real snooker table.” The France U-21 international played on the right of attack in his third-straight start. The ground filled up as kick off approached and the fans were ready to celebrate, while the 2 teams were set to clash in a match where the aim was to please the fans.