6 titles, 1 draw… and a whole lot of records 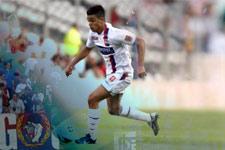 OL celebrated its 6th French title by playing out a 0-0 draw against a reserved and vigilant Auxerre.
“Five titles in a row, that was great. Six, that’s huge. Let us celebrate having such an awesome champion,” declared Frédéric Thiriez, president of the LFP, who didn’t play down OL’s achievement. On the contrary…
Six French championship titles, that’s six good reasons party on and wrap up the league. An historic 6th title! Six good reasons to finish the season like a train with no brakes, against rivals looking to book a place in Europe (Lens and Le Mans) or to stay in the top flight (PSG and Nantes). And there’s nothing stopping the Gones from breaking a host of records in the process.
Crowned 6 rounds from the end of the season, the Lyonnais kicked off their lap of honour at the Stade Abbé Deschamps against an Auxerre side as relaxed as the Lyonnais: “We’re looking ahead to next season. We’re not looking in front of us or behind us,” said Jean Fernandez before the pressure-free match took place.

In a first half starved of clear-cut chances, the fans had to wait until the 45th minute for the excitement to begin. In the one minute of extra time accorded by the referee, Milan Baros came close to beating Sorin – who until that point had been troubled only by Juninho’s free kick that fizzed wide to the right (20’). The Brazilian playmaker fed Baros on the edge of the area and the Czech international rounded Mignot with a dummy, sent Kaboul the wrong way and then fired an angled shot that Sorin stopped without too much trouble.
At the break, the local fans hadn’t had much to get their teeth stuck into either. Jelen, back from suspension, latched onto a long pass from Cheyrou, falling only a whisker short of beating Coupet to the ball 20 metres out from goal (32’). Akalé found the rebound but was denied from close range by Abidal, who raced back to clear off the line.

The second half started like the first one finished, with Sorin once again winning out over Baros, who found a shooting position after a slick team passing move (48’). On the other side of the pitch, Pedretti’s shot was well-taken by Coupet (52’). As the hour mark approached, changes were made. Bettiol replaced Baros. Wiltord gave Ben Arfa a breather. The number 18 came off after a skidding shot from 16 metres that was turned away by Sorin.

Both teams managed to effect some good link-up play, but as the action neared either goal, defence was the order of the day. And Duhamel had the last word. Cris saw yellow for impeding Thomas, and will be suspended for the trip to Paris(72’). Clerc and then Kaboul were also sanctioned for late tackles on Akalé (75’) and Malouda (80’). Fabio Santos and Grégory Bettiol, both lit up the occasion with blistering shots from 25m, trying to cap the night off in the fashion it deserved, but the first shot flew over (84’) and the second was saved by Sorin (89’).

A.J Auxerre and Olympique Lyonnais [parted ways on even terms, cutting short the string of 7 consecutive defeats for the Auxerrois at home against Lyon, (6 in L1 and 1 in the Trophée des Champions). The last draw between the sides dates back to season 94-95.
Facebook
Tweet
Forum