The 19 Lyonnais for Auxerre 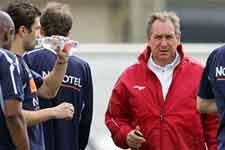 Are you set to finish what you couldn’t against Rennes?
“What’s important is that we’ve won a valuable title 6 rounds from the end of the season. For me, that’s really something. We’ve lost 4 times, including once against Toulouse, where we were no good at all in the second half. We still have the best defence and attack in the league. Against Rennes? Rennes did well to get their point. They defended well. I was satisfied with the defensive aspect of our game. On the other hand I was pretty disappointed to hear whistling. There were more spectators than supporters there on Wednesday night, I can understand their frustration, but not disappointment. For me that’s worse than our cup eliminations and our losing the final of the Coupe de la Ligue. We have 3 home games left for everyone to catch up.”

Are there any plans for tonight should Toulouse fail to win?
“We’ll watch the match, but there are no plans. For me, the title was won on Wednesday night at Gerland. Everyone has their own opinion. People are spoiled. I’m proud of my players, and a lot of people forget that, It’s better to spoiled than starved.”

Auxerre? Baros?
“It’s one of 3 matches in which we can beat the record for away wins in a season. With respect to the squad, Tiago will be absent. He has gone to Portugal to be with his wife, who is about to give birth. Baros? I can tell you it wasn’t racism. His team-mates know that. If it had been racist, I wouldn’t have defended him. I think it’s all been twisted by the current situation.”
Facebook
Tweet
Forum