A big night for the Gones [photos] 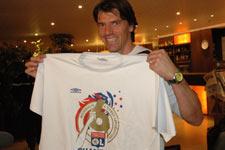 Toulouse failed to get the 3 points at Rennes, meaning that OL is now officially the 6-time French champion. The Gones celebrated at their hotel, each in his own way, but all with the same satisfaction.
However, when Toulouse opened the scoring, the Lyonnais had to leave the champagne on ice a bit longer. Then when Rennes evened the score, some players’ thoughts flew to Lyon, where one of their own had stayed behind. Govou ! Govou ! Govou ! Rémy Vercoutre, Sylvain Wiltord, Hatem Ben Arfa and the others taught those who weren’t present last season a song dedicated to “la Gove” as they all hit high-fives.
Encouraging Rennes one minute and Toulouse, where Brian Bergougnoux now plays, the next, the Gones were well aware that the title of L1’s best defence was on the line. And with the final scoreline of 3-2, it became official: OL won the defensive race! Cries of joy, relief, backslapping, text messages, phone calls, congratulations… At the final whistle, all hands flew to the air, five fingers held up on one, just one on the other…

Gérard Houllier opened the festivities with irony: “As we were beaten 5-0 by Rennes and were in danger of relegation as recently as last Wednesday, this latest title means so much more… A huge bravo to all of you, particularly those among you who have won 6 titles.” There are 4 players in this category: Caçapa and Juninho were in the squad, Sidney Govou was back in Lyon and Grégory Coupet easily made the most of the celebrations: “It’s a situation we’ve been through before and that is becoming very familiar. Thank you Rennes. We had to be champions mathematically before people could celebrate, so now let’s party!” Which is exactly what Florent Malouda intended to do. “It’s only just starting. When you celebrate, you have to pace yourself. In Cayenne? My family there is waiting to pop the champagne… but they usually drink rum. The Guyanaise have been spoilt this season with the title I have won and the Coupe de la Ligue won by Darcheville.”

OL met a solid Rennes team on Wednesday night and as such didn’t secure the title then. And it’s the same Rennes club that tonight permitted OL to celebrate its 6th title. Anthony Réveillère just wanted to say thank you. “They are my former team-mates. They really should have let us win on Wednesday night,” he said with a smile before turning to Sunday night’s match. “We have to confirm our dominance on Sunday and in the 5 games that remain after that. The bug party will be against Nantes. These days we’re missing Mahamadou ‘Djila’ Diarra, the inventor of the Haka à la Lyonnaise. Govou, Tiago, Diarra, Benzema and Fred won’t be there either. It could be tricky.”
Hatem Ben Arfa, proud of his 3rd title, concluded, “It’s the reward for an historic year. We have set a record that goes for all of Europe. Now we’ll enjoy it and share it with our fans, who we wish could have been here tonight.”