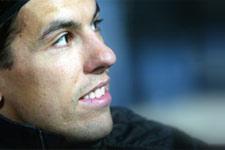 Czech forward Milan Baros responded on Friday to accusations relating to his gesture towards Rennes defender Stéphane M'Bia during Wednesday's league match...
Milan, what do you have to say about all these accusations? "I'm really surprised by everything I've read and heard. The media is wrong. You have to know that I respect everyone, on and off the pitch. It's me that asked to speak this morning, and not the club which asked me... M'Bia and I had words on the field... not always pleasant, I admit. But just the usual type of thing between opponents during a match. Ask M'Bia, he will confirm what I'm saying..."

Why did you make that gesture?
"It was simply to show him that what he said stank, that he should stop. It had nothing to do with the way he smelt or the colour of his skin. I played for five years in England and never had a problem with players who were a different colour to me. My teammates think this whole thing is very wierd. But they know what really happened."

Have you been disciplined by the club?
"Why? I shouldn't be sanctioned because I've done nothing wrong. I repeat, I am not racist. Ask M'Bia. And the player himself hasn't said anything, it was the Rennes president who spoke out. I don't have to apologise because that suggests I'm guilty and I'm not."
Facebook
Tweet
Forum