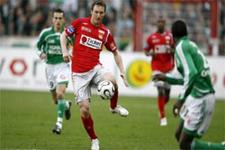 With a chance to be crowned champion this Wednesday against Rennes, Kim Källström is on the verge of achieving his number one objective.
Champion on Wednesday?
“It could be a great night for Olympique Lyonnais and all its fans. We’ll do everything to be crowned champions at home on Wednesday.
When you come to Lyon, it’s the number one objective. It’s my first season here and my first title. The fact that we have a lead and there isn’t the suspense there has been in other years does nothing to detract from this, OL’s sixth title. We worked hard all season to get it, to push ahead of our adversaries. There were some key moments during the year, like against Lens and of course Marseille. We played the second-placed team, just a few points behind us well in to the season…Our win (4-1) stopped OM in its tracks.”

Against Rennes, your former club…
“That’s part of being a footballer. We’re travellers.
At the start of the season, after the departure of some important players, the Stade Rennais were thinking they would be fighting relegation. Now, the club is vying for a European place. The Rennais can take 4th place if they win at Gerland. They really need the points, maybe more than we do. Everyone is fighting it out now that the season is almost over. The Champions League spot is coveted by several teams, including Rennes, in a group behind OL.”

Rennes’ game?
“They defend well, concede few goals and score very few goals. They count on the speed of their attackers to make the difference. Don’t forget that last season, Rennes had its best match at Gerland.”
Facebook
Tweet
Forum