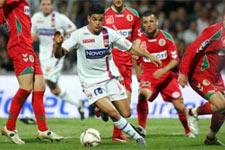 One win. That’s all that separates OL from its sixth consecutive French championship title. Just one more point for the very impatient, but two for the nitpickers.
There is only one certainty, but it’s a huge one: a win against Rennes on Wednesday would put everyone into line and assure OL of unique status in the history of both French and even European football. At the kick off, Gérard Houllier’s men were aware of the fact that it would take two wins to take the title, thanks to Toulouse’s 2-0 victory over Auxerre. The players from the Pink City are the closest thing to a rival for OL in its quest for a sixth consecutive title. 17 points separate OL from second-places Toulouse, which is almost as many as separate Toulouse from leading wooden-spoon contenders Nantes (22 points). In this historic season, it really is a case of Lyon and then the rest!

But the Lyonnais had another, and far more unusual task on the night: to save season 2006-07 from the sorry record of having the smallest-ever goal tally in a single round of L1 (9 goals in one round in 1987). To do this they would have had to score 3 goals. But, rather slow to get the ball rolling, they found the opening too late and sadly lacked precision in their finishing in the second half such that they couldn’t prevent the dismal record from being broken.

The fans at Gerland had to wait until the 10th minute for the first real chance for the home team. After classily chesting down, Sylvain Wiltord fired wide (10’). Playing at centre forward in the absence of Fred, Benzema and Baros, the native of Neuilly-sur-Marne came close to opening the score but fired directly at Regnault after a fine opening by Källström (15’). From a free kick, Juninho found the gloves of the Sedan keeper (16’), as did Källström a few minutes later (28’).

In an evenly balanced first half, the Lyonnais had Grégory Coupet to thank for not going into the break behind on the scoreboard. The OL keeper parried a header from Job (20’) and then a shot from Amalfitano (22’) before seeing another shot from the Sedanais midfielder fizz to left of his goal (27’)
With the exception of a few halting incursions, the Lyonnais had trouble producing their best attacking play. But the end of Hatem Ben Arfa’s first half went some of the way to saving face. After a shot directly at Patrick Regnault, the young left-sided player volleyed victoriously with his right foot, a centre from Anthony Réveillère (43’).

José Pasqualetti knew this for sure: his players would have to show much more drive and ambition in the second half in order to save their place among the elite of French football. After his decisive performance in the first half, Grégory Coupet saw little more of the ball for the rest of the match.

Meanwhile, the Lyonnais got down to business. Eric Abidal shot over from distance (55’). Florent Malouda in turn was wide of the mark with a header from yet another cross from Anthony Réveillère (58’. Hatem Ben Arfa shot wide after a blistering solo run behind the Sedan defence (62’) and then Regnault fisted away a direct free kick from Juninho (65’). The Lyonnais dominated but couldn’t convert possession into goals. But not through lack of trying! Robbed by Belhadj in the area, Juninho almost certainly deserved a penalty (82’). Shots from Toulalan, wide in the 83rd minute, and Tiago, base of the post in the 88th, came very close to widening the advantage of the Lyonnais. Hardly more successful, Govou (85’) and Ben Arfa (90’) shot wide. At the end of time added on, Tiago’s lob hit the crossbar (90’+2).

In the end, the margin was narrow, but it was the content and not the style that was important: home victories have been few and far between in Lyon of late! The Lyonnais last won at home on February 10 (1-0 over Lorient). So now OL just needs a win against Rennes on Wednesday. Just a few days more and OL could be crowned again.
Facebook
Tweet
Forum