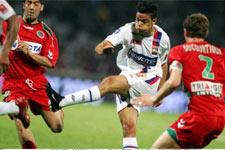 In the 44th minute, as half time approached and chances in the match were becoming rare, a powerful volley finally hit the back of the net, leaving Regnault helpless despite his stunning display up until that point.
Hatem Ben Arfa could well raise his fist to the heavens, this classic left winger, as he had just scored, with a right-footed volley, a beautiful goal, his first in L1. “That’s it, that’s the goal!” These words resounded with relief as the young winger faced the media after the match.

The OL attack had something of a new look at kick off. And while Malouda was playing on the left, Wiltord the chameleon, was at centre forward. The absence, for various reasons, of the usual attacking players, along with the hard work of a certain U-21 player – in training, with the reserves and with the France U-21 team – meant that Hatem Ben Arfa took up the third place in the Lyonnais attacking trio.

The last time we saw him play in L1 was February 16, for 13 (short) minutes against Lille. Since then, being late for training cost him a starting position against Sochaux at the end of February, and a lot more besides… Hatem, just 19 years old, must learn his lessons. “This break stopped Hatem’s rhythm, which was a shame, but it did him good as well. He learned his lesson and he is much more attentive these days. He has understood that it was for his own good,” commented Patrice Bergues at the end of an OLTV interview, before adding: “This slip-up at training cost him dearly. He hasn’t played much but he has listened to what’s been going on around him, to the staff as well as the players… his friends, his entourage…” Juninho continues the theme: ”He has always had talent. This match proved that mentally, he has progressed a lot.” So it’s a hardened number 18 that we saw on the training pitch against Montpellier just last week. After a good dose of CFA and some U-21 international action (against Denmark and Norway), the young Hatem came back to L1 after a 2-month absence for his 4th start of the season (11 appearances in total).

Lacking match fitness and match time with his team-mates, he first had to find his feet in the match. A tough assignment considering the match kept changing registers, and with it the marker, the side of the pitch and his exact position… from Lachor to Ducourtioux passing through Ouadah, who he turned magnificently before his shot – right in front of goal – ended up in the gloves of the opposition keeper (40’). Far les greedy than usual, Ben Arfa played the team card. And it was at the end of a copybook passing move involving most of the team that he latched onto Réveillère’s cross to slam home a volley that “was worth the trip” according to Rémi Garde.
For the shot, Hatem had the jump on Romain Sartre, and it was Regnault who was late…