The OL squad for Sedan 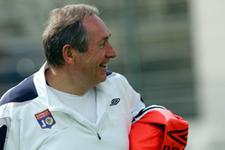 Is this an unusual week?
“I’m sticking to my logic. We have our destiny in our own hands. If we negotiate our next 2 matches well, we will be crowned champions. The faster we win the title, the greater our satisfaction and appreciation will be. (Joking) Happily January was a tough month, otherwise it would be all over by now. But it also emphasises the fact that what we have achieved is a real feat. We always do our best, even though we know that it isn’t always good enough.”

Does the constant questioning of the team’s performances annoy you?
“No. People are used to eating caviar and have a hard time stomaching anything else. But let’s not forget what we have done. I still think you have to really play in order to win. At OL, you also have to put on a show; we have a duty to entertain. Sure, we could play like some teams who sit back don’t really try to attack. But don’t count on me to go down that road. I would no longer be OL manager.”

Winning at home?
“That would do us good. The pitch will be in great shape. The players will be really motivated and will enjoy themselves. Our game is suited to all these factors. We need to win to inch closer to the title, as we’re not depending on anyone else for that. It’s our top priority. After that, we’ll move onto our second priority: honouring the title. That is, we want to finish the season perfectly without taking our foot off the gas.”

A word on the problems of the last few days?
“First of all, training this week was really happy and enthusiastic. The behaviour of one or two people doesn’t change the atmosphere. Did I want to show that I’m the boss? Boos of the dressing room, yes, even though it’s not my top priority. That would be the title. Fred made my decision easy, knowing that Benzema was injured and Baros suspended. I prefer to count on lads who behave professionally, otherwise it’s chaos. Also, I warned the squad. Fred’s case is different from Diarra’s, though. I can confirm for you that it’s not a problem with me. I can’t say any more about it. But he wanted the others to suffer because of his feelings about the club. It’s a lack of respect. I’ve always supported him; he has played in some very important games in the last few weeks. Am I preparing the scene for next season? In a certain way… yes. OL is no Club Med. I’ve never demanded an apology from him. The president’s comments recently in (sports daily) L’Equipe? I will only discuss that subject once the season is finished.”
Facebook
Tweet
Forum