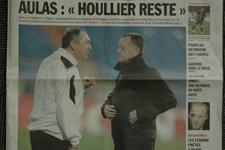 A look around the papers on Friday April 13 2007
[IMG41308#L]It’s the headline in L’Equipe this morning and all the radio stations are talking about it.
Jean Michel Aulas, President of Olympique Lyonnais, has thus put paid to the rumours of a split, reports the sports daily, which dedicates an entire page to the story: “I stake my honour and reputation on the fact that Gérard Houllier will be here next season and that the club will continue to function as it has done for the last 20 years”.
And then Jean Michel Aulas continues: “Some people want to destabilise us to advantage our rivals and they are spreading malicious rumours about Lyon.”
About the rumours of Juninho’s or even Coupet’s departure, he responds, “I’m sure he’ll stay, and the same goes for Greg.”

Following this interview, Vincent DULUC explains how questions came to be asked about Gérard HOULLIER’s future at OL. His analysis is preceded by this headline: “An isolated manager who wrote that, in 2007, Lyon lost its quality of play and its team spirit at the same time. This contributed to the weakening of Gérard Houllier’s position”.

[IMG41303#L]In Aujourd’hui en France it’s not a Jean-Michel Aulas interview but one with Hatem Ben Arfa. The young Lyonnais discusses his ambitions and appetite for success. He knows he has a lot of work to do and a lot of tough times to get through in order to reach the highest level. He explains that he is happy to play with OL but says that he won’t make much progress playing in the CFA… in the end he says: “I feel ready now. Here or elsewhere, I’ll succeed!”
Facebook
Tweet
Forum