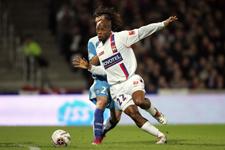 One in the hand is worth three in the bush! In OL’s frantic quest for the national title, every point counts.
Thanks to their 0-0 draw obtained in Valenciennes, along with Lens’ 1-0 defeat in Rennes, OL now only need 5 points to be crowned champions of France for the sixth year running. This is the principal outcome of round 31. And the record for away victories in a season still awaits.

A week after their loss in the Coupe de la Ligue final against Bordeaux, Gérard Houllier’s men couldn’t quite get the better of a Valenciennes team happy to share the points, and in the end OL conceded a draw on the road. A first for the season.
Like at the Stade de France, OL had an encouraging first half before slowly sputtering out in the second half. They would derive some satisfaction from having created many more scoring chances than their hosts at the Nungesser, from not having given up and from, on the whole, having easily contained the Northern side that was coming off a win against Lille.

While the memory of his 100th game at the helm of OL may not live long in Gérard Houllier’s memory, he may on the other hand feel the consequences of the draw for some time to come. It’s almost become a bad habit: matches between Valenciennes and OL seem to bring many injuries, notably diminishing the Lyon squad. Sidney Govou and Karim Benzema were injured the first time the teams met this season. The young France international once again left the field early, this time with a thigh injury (53’). In the first half, Jérémy Toulalan was obliged to give way to Fabio Santos after a clash with Jeovanio (20’).

The matches must be blurring into one for Gérard Houllier, as in the first 45 minutes, Valenciennes produced an identical performance to that of Bordeaux in the Coupe de le Ligue final: not creating a single scoring opportunity. The only difference was at the other end: they were under much more pressure than the Girondins, owing their survival to the post that was rattled by Karim Benzema (11’). But dominating isn’t scoring! The young France international had earlier been off target again with a shot on the turn (7’)and then with a header from a Sylvain Wiltord cross (35e).

Gérard Houllier fielded Kim Källström I place of the injured Juninho. Three times the Swedish international troubled the Valenciennes rear guard. His free kick was fisted away by Penneteau (3’). He then missed a shot from the left (15’) then found the head of Paauwe (27’). Sylvain Wiltord tried his luck, but in vain (38’).

After the break, Milan Baros came close to turning in a Wiltord header (47’) and Florent Malouda found the side netting after a dazzling display in the area (59’).

Antoine Kambouaré’s men proved conscientiously reticent but briefly surged late into the game, showing up the OL defence. Grégory Coupet saved from the feet of Savidan (62’) before winning his duel with Roudet (64’). Abidal cut out Castelroussin’s cross just in front of Dossevi (65’).

Danger averted and OL were right back on course. Nicolas Penneteau saved Milan Baros’s acrobatic volley before Sébastien Squillaci hit the side netting (67’). Sylvain Wiltord shot over once again in the 70th minute.

While OL will surely be regretting its poor finishing, they will still be happy with the precious point brought back from the North. Thanks to this sharing of the points, OL take a small step towards the beckoning title.
Facebook
Tweet
Forum