The OL squad for Valenciennes 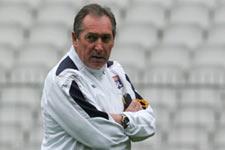 18 Lyonnais will make the trip to the North. Juninho is out injured. Enter Fabio Santos…
The squad:

Juninho getting treatment, Ben Arfa, Berthod, Cacapa and Diarra overlooked by the manager. Berthod took a knock in training.

Gérard, how are you approaching this trip to the North ?
“It’s an important match for both teams. We just lost in the final of the Coupe de la Ligue. We’re going to do our best to put in a strong performance and get a result against Valenciennes. The match is also important for our adversaries, even though they took a huge step towards beating the drop by getting the three points in Lille. Valenciennes has been pretty ordinary at home but better on the road. They have the league’s top scorer, but it’s about your whole squad. The team that has the stronger will to win will prevail. I think there’ll be more good football than at Nancy.”

Are you over the defeat to Bordeaux yet?
“I’d like to say ‘yes’ due mainly to the week of hard work put in by the lads. Personally I’ve been thinking solely about the match against Valenciennes since the Bordeaux game finished. On Saturday we’ll need some muscle and strong heads on top of our tactical and technical qualities. In the first half of the season, Valenciennes scored on the counter, but we had dominated the entire game. Valenciennes, as I’ve said before, have already beaten relegation. We’re going to meet several teams battling relegation, like Nantes, Sedan, PSG… Our objective? Winning the title that will be the barometer for the quality of our season.”

Can we expect some line-up changes?
“You’ll see. When Juninho is out, it’s Kim (Källström) who replaces him. He’ll play. The tactical system? It’s already won us several games and a title. I couldn’t always do what I wanted because we had injuries. I prefer to stick to an established line-up. Ben Arfa? He’ll play in the CFA. You know why, I haven’t played him in a while (delayed talks). I was counting n him enormously. We’ll see once the title is won. My objective is first of all to win the title and to take charge of the players who are playing. I wasn’t affected in the least by what Karim Benzema had to say.”

You’re about to manage your 100th match. What are the matches that stand out for you?
“I’ve had a great time; there has been a range of emotions and too many narrow losses for my taste. The first match in Auxerre in the Trophée des Champions, I’ll never forget it. In the league? I really liked our home game against Lille this season for very personal reasons. Marseille too. In the Champions League, our 2-0 win over Real Madrid. The next phase in my adventure at Lyon? I read with interest and a grain of salt everything that’s written about on the subject… I try to understand but I swear I don’t get it at all.”
Facebook
Tweet
Forum