The last calm minutes before the party 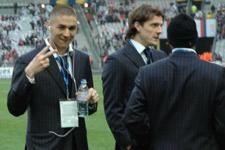 It was 18:50 when the OL players’ bus left the Grand Hotel d’Enghien-les-Bains for the Stade de France to the applause of the 50 or so supporters gathered there to encourage them.
In official dress, all the players talked among themselves after having listened to 20 minutes of Gérard Houllier’s pre-match chat. The solemn faces of Claudio Caçapa and Juninho clearly showed the intense concentration inherent in such big matches.

Just 25 minutes later, the OL delegation was walking the last few metres towards history, awaited and acclaimed by the OL supporters who had travelled to Saint-Denis. After 5 years of waiting for the players and their indomitable fans was coming to an end!

A brief passage through the barriers of the ‘SDF’ later. 19h30 on the pitch. The stands are still only scattered with fans. “When it’s full, it’ll be awesome,” remarked Toto Squillaci about the stand quickly filling up with OL supporters. Karim Benzema, Sidney Govou and Sylvain Wiltord accompanied him. Kim Källström reads a magazine, the only one already on the bench they will sit on a bit later. In the middle of the pitch, Gérard Houllier grins with joy.

When Grégory Coupet, Rémy Vercoutre and Joël Bats took the field at 20:05, the Stade de France was already nearing capacity. And it was under a banner reading “If you don’t jump, you’re not Lyonnais” that the Girondins de Bordeaux took the field to warm up, followed closely by the Lyonnais.

At 20:20, thanks to the stadium’s speaker system, the whole place went up in cheers for the first time that night, and certainly not the last!

There was just enough time for the two sides to return to the dressing rooms before the stewards came out to present to the fans the trophy destined for the vanquisher of the Coupe de la Ligue.

20:39: Rémy Vercoutre’s name resonates for the second time as the line-ups for the final of the Coupe de la Ligue are announced.