Stabbed through the heart 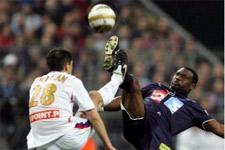 Fate is extremely cruel. No one would have said Bordeaux were in form. In truth, the Girondins have rather rediscovered how shut down a game and wait for their opportunity, a tactic that saw them finish second last season.
Thanks to a stoppage-time strike from Henrique, the Girondins won their second Coupe de la Ligue after what was really a lacklustre game. In truth the Lyonnais didn’t deserve to lose in the end but didn’t do enough to deserve the victory either.
Just like against Roma at Gerland in the Champions League, OL were wide of the mark. Just like against Marseille in the Coupe de France, OL cracked in the dying moments of the match. And the same poor performance offers the same result: OL hasn’t managed to win a single cup this season.

Unbeatable in the first half of the season and still in the running in 4 competitions after the winter break, OL is now left only with the league and an historic 6th title to console itself. In winning another title, Lyon will go down in French football history but few believe this will satisfy such an ambitious squad. In terms of history, the saddest thing is that have few opportunities left to realise their formidable potential. Emblematic of this situation is Juninho, who was replaced by Kim Källström in the 68th minute.

It’s true that rarely has a huge decider such as this lived up to its name so poorly. With the exception of the first 20 minutes, during which the Lyonnais pushed hard for the opener, the game was light on scoring opportunities and it seems that OL, the great edifice of French football, came to grief on the smallest of details; you can count the number of second-half chances on one hand. To tell the truth, the second half was more like an express trip to the end of boredom than the dream final it was touted as.

The match seemed to start well for Gérard Houllier’s men, with the first minutes largely to their advantage. Sydney Govou scuffed his shot to the left (4’). Then Fred failed to score from Govou’s centre (11’). Florent Malouda’s shot licked Ramé’s left post (12’). Playing a 4-4-2 formation that forced Johan Micoud to play on the left, the Bordelais sat deep for the first 20 minutes.

Toulalan threatened Ulrich Ramé with a powerful 30m drive (17’). Govou couldn’t get his shot from the left on target (18’) and no one could get on the end of a floating Juninho free kick (19’). The Bordelais weathered the storm. Finding possession once again and breaking well at the front, they didn’t concede another chance to OL for the following 25 minutes. In a final push forward just before half time, Gérard Houllier’s men challenged the Girondins’ keeper twice. Juninho’s indirect free kick was tipped wide for a corner (45’) and his next effort was easily taken by the keeper (45’+1).
At the break, the substitution of Chamakh for Marange had the Bordelais lining up in a 4-2-3-1 that permitted Johan Micoud to start pulling the string in the centre of the park.
From that point OL was incapable of troubling Bordeaux, except with set pieces. Juninho’s corner found the head of Florent Malouda, but his header went wide (57’). After another free kick from the Brazilian, Tiago volleyed wide (67’).

The Bordelais pulled off the rare feat of creating only one single chance during the first 89 minutes of the game: Faubert shot wide from the edge of the area in the 61st minute.

The half hour that followed was completely devoid of scoring opportunities! To the point that as the end of regular time approached, the unavoidable seemed to be taking form. It is in just such matches, when the stakes overshadow the game itself, that the cruellest and most unjust situations develop. And this third meeting between the sides this season didn’t break the rules. With one minute to go, Johan Micoud put his corner on the head of Henrique, who nodded home (90’). A sad and unjust occasion for Rémy Vercoutre, who until that point hadn’t had the slightest save to effect

Such is football, with disappointments as great as the joys it brings. So many dashed hopes that could have turned into the most intense joys. But it will make the victories to come that much sweeter…
Videos
Facebook
Tweet
Forum
Videos