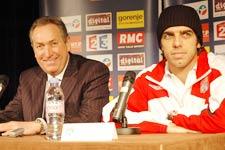 Do you feel that this is OL’s last “big” match of the season?
No, because for me, that match will be the one that wins us the title. This final is an important chapter in the history of our club and for the resumés of our players. That’s the reason I wanted you all to be here. There is a kind of logic running through our campaign from our first match to this final one. Almost all my players took part in the competition. Also, for me, the most important match is always the one coming up. And our coming matches will be decisive in our quest for the title.

Do the Bordelais have an advantage in terms of the big difference between the way the 2 squads have prepared over the last 2 weeks?
I don’t think like that. If Bordeaux has that advantage, then OL has the advantage of having internationals, players whose quality means they can play at an international level. Also, our squad all know each other really well. We’re used to playing together, and the lads are happy to be back together now. There’s been a build-up in our power leading up to this final, which hasn’t come too soon but in fact at just the right moment. Also, I’m confident. At the highest level, players are able to keep up momentum and not confuse their tasks. We’ve turned away from internationals now, and we’re focused entirely on the Coupe de la Ligue final and the coming week, when we’ll turn our attention to the league.

Do you prepare differently for a final from how you would prepare for any other match?
Yes. We’re on the pitch. It’s not a sacrifice but a privileged constraint. So the preparation is different. It’s also different from the other finals I have experienced because the players have only been back together since Thursday night on the whole. We know it’s a huge match and that we have to put our stamp on it. In any case, we’re confident: we�ll put in a n excellent performance.

You have won every final you have contested. Do you base your approach on this element?
No, not at all., It’s true that it gives you a kind of experience because you know what qualities a game such as this demands. What gives me confidence is the quality and enthusiasm of the squad, and also its solidarity. We’ve had some tough moments that w got through together. We regrouped, even though it was sometimes in painful circumstances.

Do you se this final as a kind of revenge after Bordeaux’s victory at Gerland?
I don’t like the word ‘revenge’. Bordeaux was lucky to win at Gerland. I also thought they played rough. We don’t like losing at home, especially to the team directly below us.

What will decide this final?
At the highest level, matches are played out on little things, on details. Communication and mentality play a big part.

[IMG41770#L]Does the possibility of achieving an unprecedented double increase the pressure on your shoulders?
No, it simply increases my pride and responsibility. As well as the desire of the players. It’ll be part of a logical progression for the club, we’ve fought hard to get here. The match against PSG symbolises the commitment of the players in reaching this final. I should also mention our fans, who have shown steadfast loyalty since the beginning of the season, and 35,000 of whom will be making the trip, deserve some kind of recompense.

Will it be more painful than ever to pick a starting 11?
Painful isn’t really the word. I want to field all the players, because they have all made their contribution. We know you can only have 18 on the team sheet but we know we’re all together and that the 11 on the field are the representatives of a united squad. Some will feel rightfully disappointed but our players have good attitudes and understand the situation.

How are you feeling on the eve of this final?
When I signed my 5-year contract at Lyon, I never imagined being here today, 5 titles later, able to play in the final of the Coupe de la Ligue. I’m very proud of my campaign in the Cup but also of that of the team. Right now, we’re wondering why OL didn’t win the Champions League. That shows how far the team has come. I’m proud and I hope the best is yet to come. I’ve never won national cup competition. It’s even my first final. So, I hope to lay a good match and help the team to victory.

Does the prospect of winning the double compensate for not making it further than you did in the Champions League?
Winning a sixth French title will be historic. At the start of the season, the club’s priority was the 6th title. The double will be historic for the club. The photo will stay with us for lie. It’s up to us to be a part of history. No-one has ever done the double. It’ll be worth the effort.

Did your declarations after the match with Roma put you under more pressure than usual?
For me, the competition and the opponent don’t make much difference. Pressure should always be at 100% because under pressure you get the best out of yourself. Football is a team sport. The team wins together, OL’s power has always been collective.

You recently admitted to playing despite a protractor injury. Are you 100% fit now?
These days in football, if you wait to play until you’re 100% fit, you’ll only play once a month. I’ve had a bit of pain in my protractors since the start of the month but we’re getting it under control. We played a friendly match, which helped my recuperation. Also, any player has a strong desire to play in a final.

[IMG41983#L]What do you think of Ulrich Ramé ?
Ramé is a key player for their team, their most experienced. I don’t think I’ve ever scored against Bordeaux.

Do you take this Bordeaux team seriously?
They have been getting stronger for the past two months and are more consistent. Despite the ranking that puts us ahead of them, a final is always a different kind of match. Bordeaux is a quality side. Also, this final is a chance for them to get something concrete from their season.

A word on your relationship with the OL fans.
With time and results, it’s been a love story and I have held the attention of the fans. What makes me feel great is that the fans like what I do on the pitch. I get more joy from giving pleasure than from receiving it.
Videos
Facebook
Tweet
Forum
Videos