A look around the papers on March 30 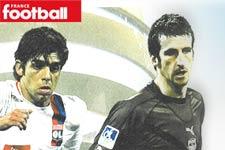 The press is ramping itself up ahead of the Coupe de la Ligue final on Saturday night… Le Progrès dedicated an entire page to Juninho… L’Equipe devoted its fourth page entirely to the 2 finalists… France Football went the whole hog… Aujourd’hui en France
[IMG41305#L]Le Progrès:

the headline reads: “We want to make history”. On page 27, Jean-François Gomez and Antoine Osanna give us an interview with “Juni”. The Brazilian discusses the importance of this final, looks back on the elimination at the hands of AS Roma, talks about his contract extension, his career after playing, important OL figures in his time at the club, his youth and his family.

On the back of this page, the sports daily’s roving reporters run twin interviews: one with Toulalan and the other with Mavuba. The Bordelais says: “It’s a dream final”. There is also news from the just-completed OL training session. And a rumour file to finish.

At the top of the page, “The Mysterious Ricardo” by Régis Testelin. A look at the different facets of the Brazilian manager. At the foot of the page, Vincent Duluc has a few words on Wiltord “Wiltord at a crossroads” and Claude Chevally discusses “Vercoutre, the specialist”. There’s also a word on the state of the 2 squads and the likely starting line-ups.

At the top, a photomontage of a challenge between Micoud and Juninho with the Cup in the background. From page 10 to page 17, then from page 24 to page 27, a complete report on the clash. “An ogre and a starving man”… “The Specialists”… “The Final Battle”. There is a piece on Govou and Wiltord, in competition for the same position for the last 3 years… “It’s nothing we haven’t dreamed of” says Ricardo in a double-page spread… Another double page has “Lyon-Bordeaux, the five keys to the final”… After reading all this, it’ll be impossible not to know everything there is to know about the final… except the result.

The Parisian daily chose to run a report on the clubs fighting for L1 survival. We understand… because PSG is concerned. Also a look back on the France team. The Coupe de la Ligue final? It’s on page 27 in the IN BRIEF section. Just a couple of lines on the state of the 2 squads.
Videos
Facebook
Tweet
Forum
Videos