Notes on the OL squad 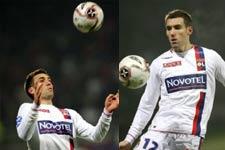 After the international break, it’s back to domestic affairs including the 30th round of L1 and the Coupe de la Ligue final. While some Lyonnais were occupied with international matches, others had a chance to recharge their batteries…
Coupet, Clerc, Abidal, Malouda, Toulalan, Benzema, Govou, Fred, Tiago, Källström, Baros, Müller and Ben Arfa were called up for national team duty. Neither Squillaci nor Wiltord played a single minute.

In the OL squad preparing for the Coupe de la Ligue final, there are some players who have been “rested” for some time. Anthony Réveillère hasn’t played since confronting Rome on March 6. Cris, since March 11. Sylvain Wiltord has played only 6 minutes since the trip to Nancy on March 17. Cacapa? his last match dates back to February 10 (for the visit of Lorient). Berthod? February 24 (for the visit of Sochaux) with the first team. Jérémy played with the CFA squad on March 13 against Pontet. Vercoutre played on March 17 with the same squad in St-Etienne.
Videos
Facebook
Tweet
Forum
Videos