A day in the life… of the Lyonnais 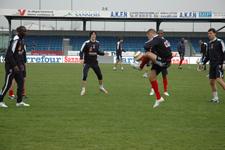 It was under a foggy sky and the traditional applause for those who scored for their national team, namely Tiago and Benzema, that the Lyonnais began their day at Enghien-les-Bains.
After breakfast and a few games of foosball and pool, Clerc, Vercoutre, Diarra, Toulalan, Malouda, Caçapa and Squillaci talked to the press.

The squad then got on the club bus for the Michel Hidalgo stadium to train in front of 50 fans in the stands of the ground usually inhabited by the Sannois-Saint-Gratien club.
Only Milan Baros, Tiago and François Clerc took no part in the session. The Czech’s fans will have to wait a bit longer to see his new hair style and clothes.

His team-mates started the session with physical work with Robert Duverne, then a Toro before throwing themselves into a match with no goals.
The 3 keepers (Grégory Coupet, Rémy Vercoutre and Alexandre Bouchard) worked with goalkeeping coach Joel Bats.

For Kim Källström, Sidney Govou and Patrick Müller, the day finished on the set of OLTV, where they were the guests on OL System at 19:00.