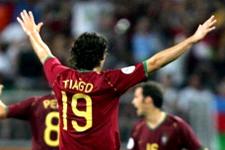 The results for all OL’s internationals
[IMG41393#L] Tiago
Portugal, a big winner over Belgium (4-0) 4 days beforehand, had more trouble against Serbia in Belgrade. The two sides fought out a 1-1 draw and it was the Lyonnais Tiago who opened the scoring after 4 minutes of play. The Olympien played the entire match. In the same group, Azerbaijan beat Finland 1-0. Poland beat Armenia 1-0. Portugal (11 points) moves into second place, in front of Finland on goal difference, and behind Poland, who top Group A.

[IMG41962#L] Milan Baros
The Czech Republic beat Cyprus 1-0, thanks to a Jan Koller strike, in the 8th round of Group D. Milan Baros, who started the match, was replaced by Plasil in the 77th minute. The Czech Republic is second in Group D (13points, +11) behind Germany (13 points, +18). Then follows Ireland on 10 points.

[IMG41391#L]Kim Källström
Kim replaced Svensson at half time as Northern Ireland led 2-1. Sweden (12 points), which just conceded its first defeat, drops one rung on the ladder to the benefit of its opponent of the day, Northern Ireland (13 points). Then comes Spain, which beat Denmark, with 9 points in Group F.

[IMG41394#L]Fred
Vagner Love scored the only goal of the game between Brazil and Ghana in Stockholm last night, a replay of the last 16 of the of the 2006 World Cup. Fred did not play.

[IMG41392#L]Rémy Riou & Hatem Ben Arfa
René Girard’s side went down 1-0 to Norway on Tuesday night in Tours. Rémy Riou played the whole match while Hatem Ben Arfa replaced Matuidi in the 57th minute.
Their next match is against the Ivory Coast on Thursday May 31 in the International Festival of Toulon.