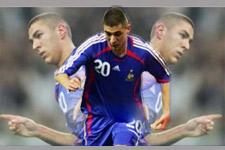 In his first appearance for the French team, Karim Benzema turned in a stunning performance. Brought on at the break for Djibril Cissé, the young Lyonnais waited only 8 minutes before scoring his first-ever goal in the blue shirt.
From wide free kick obtained by François Clerc, Samir Nasri put in a cut-back cross for Benzema who beat the keeper with a side-footed effort.
Thanks to the young Olympien’s cool finish, France beat Austria 1-0 in an international friendly.

5 OL players took the pitch at the Stade de France. As starters, Grégory Coupet and François Clerc played the entire match. Eric Abidal and Karim Benzema came on at the break while Florent Malouda came on in the 70th minute.

With the exception of a strong fist on a shot from Ivanschitz (10’) and a save from the feet of Linz (45’), the OL keeper hardly had an opportunity to make himself apparent.

On the right flank, François Clerc showed defensive solidity while being inspired going forward. Two of his incursions could easily allowed the French to open the scoring but neither Cissé (3’) nor Nasri (19’) managed to latch onto crosses from the OL right back.

Eric Abidal, accompanied by Florent Malouda in the last 20 minutes of the match, successfully annihilated any Austrian attack down the right flank.
Facebook
Tweet
Forum