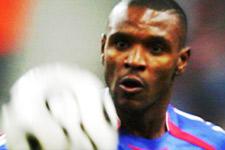 5 Lyonnais were on the pitch at the S. Darius and S. Girenas Stadium in Kaunas for the starting whistle blown by the English referee Howard Melton Webb. Tiago, Baros, Fred, Ben Arfa, Müller and Belhadj played...
[IMG41392#L]Grégory Coupet, Eric Abidal, Jérémy Toulalan, Sidney Govou and Florent Malouda were starters for their Group B Euro 2008 qualifier between Lithuania and France. A notable inclusion in the squad was the Chelsea youngster Lassana Diarra, who had just received his first call up to Les Bleus, who played a 4-3-3 ‘à la Lyonnaise’. The Lithuanian side, well established and tenacious, took the game to the French, but Les Bleus won out 1-0 thanks to a Nicolas Anelka strike (73’). Cissé (62’) and Diaby (89’) replaced Govou and Malouda in the second half.
Earlier in the day, Scotland had beaten Georgia (2-1) and the Ukraine had beaten the Faroe Islands in Group B. With 12 points, Les Bleus are still second behind Scotland.
[IMG41510#L]Their next match is on March 28 against Austria.

[IMG41393#L] Tiago
Luiz Felipe Scolari’s Portugal displayed remarkable technique to take all three points and move closer to the top of the Group A table, behind Finland (11 pts) and Poland (13pts; +1 match), by beating Belgium 4-0 at home. The Belgians didn’t have a chance against a Portugal side that perfectly allied individual brilliance and collective force. Tiago played the whole match in the Portuguese midfield. The goals were scored Nuno Gomez (52’), Cristiano Ronaldo (54’, 74’) and Quaresma (67’).
[IMG41510#L]Their next match is on March 28 against Serbia.

[IMG41962#L] Milan Baros
The Czech Republic went down 2-1 in Prague to Germany. A double from striker Kuranyi (42’, 62’) took Germany to the top of Group D with 13 points, ahead of the Czech Republic (second on 10 points), who lost despite a goal to Lyon’s Milan Baros (76’), paired throughout the match with Jan Koller in attack.
[IMG41510#L] Their next match is on March 28 against Cyprus.

[IMG41392#L]Hatem Ben Arfa
On Friday, René Girard’s France U-23 side beat Denmark 3-1 in a friendly match ahead of the Euro 2009 qualifiers. Hatem Ben Arfa played 70 minutes behind the attacking trio of Samassa, Dia and Menez.
[IMG41510#L] Their next match is on Tuesday March 28 against Norway in Tours.

[IMG41390#L]Patrick Müller
On Thursday in Fort Lauderdale (USA), “Pat” and co didn’t wait long to open the scoring against Jamaica: Stressel pounced after 7 minutes and the OL defender got he second 5 minutes later.
[IMG41510#L] Their next match is on Sunday March 25 against Colombia.

[IMG41396#L]Nadir Belhadj
Nadir Belhadj and the Algerian team struggled to beat Cap Verde 2-0 in an African Cup of Nations 2008 qualifier. The OL international, on loan to Sedan, played on the left of midfield. Algeria (7 pts) strengthened its place atop the Group 8 table in front of Guinea (4 pts), Gambia (4 pts) and Cap Verde (3pts).