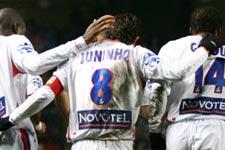 The national teams are concerned with their Euro 2008 qualifiers. 15 Lyonnais have been called up to represent their various countries. Notable mong those who are still at training in Tola Vologe in Lyon is Juninho…
“Juni” is making the most of the break to work hard and to get over some niggling injuries. The Brazilian is committed to being at the top of his game for the Coupe de la Ligue final. “In Nancy, I think I played my worst match. I hate that…”. The former Vasco da Gama player has always had his head screwed on straight. “It’s been three seasons in a row since I had a break. After the World Cup in Germany, I quickly returned to the squad and gave everything I had until the winter break…”. So it’s easily understandable that his run of form abated, also aided by the poor quality of certain winter pitches that disadvantaged his technical game. Not to mention the drive of the opposition faced and the poor form OL suffered collectively.

Finally, since the break, the Brazilian has played in 13 of OL’s 16 games, 9 of them in their entirety. He has scored 2 goals and has 4 assists for an involvement in 6 of OL’s 12 goals scored in 13 matches. He missed 3 matches… and OL won each one of them.
Facebook
Tweet
Forum